A little later than expected (no surprise there) but I had one or two technical problems. I'd decided this collage would have a needlefelted base with lots of ribbons made from my recycled bits & pieces including clothes - if I find an affordable silk top in a charity shop I buy it knowing that I'll wear it for a while, watching for it to start disintegrating & gleefully ripping it up for this kind of use. Lots of repurposing.

This is based on my square from the month of September (scroll down to Oct 3) & that was based on looking up all sorts of artists like Jane LaFazio & Arlee Barr. They also feature in the QA e-mag 'In Stitches'. I don't think I'm denigrating the technique if I say it's accessible & one can do as little or as much as is desired.

First I compiled my chosen bits & pieces - photographing stages as I go along makes me quite organised! 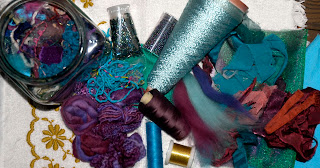 There's (one of ) my jar full of odds & ends, the contents of a selection bag, balls/cones of wool that I snap up every time I see them in charity shops, wool tops/rovingribboned items of clothing & bought metallic organza. Also a few threads & beads.
My first technical problem was the white towel all the above is sitting on. I was sorting a chest full of bedding & towels out recently & came across a few 'Guest Towels' of the kind my mother put out when we has Guests. Well, they were my mothers. Why white, I ask?!  I thought, perfect shape for a small hanging or backing for part of a hanging. I didn't know that a needlefelting machine didn't like the way towels were made, hundreds of loops, broke one needle & didn't think how tightly stitched those floral embellishments were, broke the second needle. You live & learn, they'll be used for something else.. So I used some loose weave recycled linen as a backing & felted away. 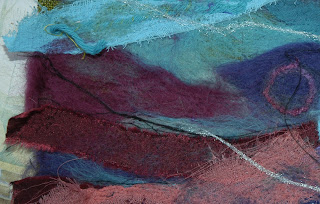 I added random pieces of wool roving all over 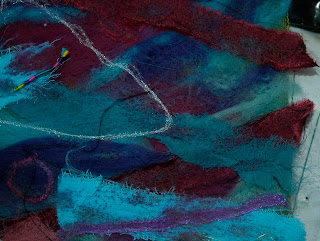 then strips & ribbons of shiny, silky, stretchy & cotton fabric & dyed (not by me) builders scrim & different lengths of yarn. I couldn't help but make a few circles, but I don't feel I'm reinventing the circle or anything ;) It's also quite 'intuitive ', oh how I love that word! It's a bit like a landscape, I'm borrowing from that a bit, I guess. I do see some of these colors in the land/seascapes some of the time, I just love these colors. 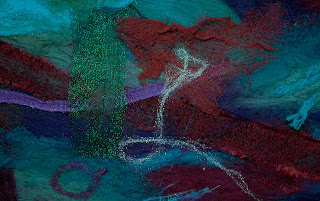 Love the blending part where you turn the work over, the needles push the fabric back thru again to the front which tones down all those newly added bits, as much or as little as you want (or would it get muddy after a while?) 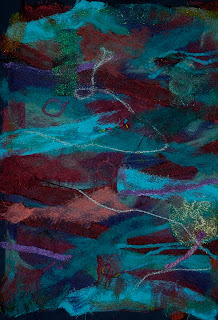 Now for stitching, which is where I came unstuck for the second time. I did some travelling about in 'landscape' form with straight stitch then thought i'd put my very newly learned free machining to good use. Well, did i write down what I did before on my machine? no. Went to google again & almost every entry says 'set up your machine as per your operating manual' My manual doesn't say anything about FME. So after 2 hours of research & rethreading the machine a thousand times & trying to 'bring the bobbin thread up thru the fabric'- it's everything set at zero, stitch selector on buttonhole, feed dogs down, basically...isn't it?

anyway, before I thought my chest would explode, I got out the trusty darning foot & meandered around using a mixture of turquoise & gold metallic thread , burgundy & turquoise cotton, again, randomly, following the previous random shapes. If you start, you get something to follow. Amazing, really! 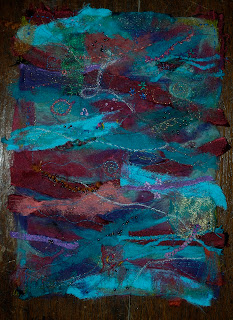 Then it was time to add some hand stiching & a few beads. I'm new to this so I guess I feel this is sort of a sampler, but nothing is that difinitive really, not in my house! Above is the 'finished' piece but I could go on adding ad infinitum. My DH is worried there's no 'focalpoint' i'm happy for the eye to meander. If I made a focal point would that make all of the above 'just' a background? He admitted that if it was called 'red sunset over the sea' he'd 'understand' it better. I'm just glad I went & did it!
(re flash, a necessary evil; I would only get a 15th of a sec, outside under a huge darkening sky)
Posted by Emma at 06:01

Well, I hope that you have time for a rest and or walk after all your efforts. Great colour combination.

I love it! Maybe 'Storm over the Sea at Sunset'?!
My sorts of colours, gonna have to have a go at this sort of creating, though most will be done by hand...watch this space!

Hi Emma, Really fun to see your process, the beads are subtle and act like little morsels to find in this turquoise dream. Keep at it, love this. xox Corrine

Huge potential in this piece and this technique! Don't stop now!

Gorgeous colors and it looks like a fun process. i did not know that needle felting machines existed. If you don't find any silk shirts to tear up I can give you the name of a really good company that sells recycled sari silk ribbon, already distressed.

Love the step by step and your journaling Emma....beautiful colours...love it.

I just love this sort of work. I love this piece. It is totally abstract and doesn't need a focal point although maybe in the future you will find something more to put on it that will be a focal point and it will be perfect. Thanks for sharing your process. Wonderful color combo. really works.

Well done for persevering Emma, it's lovely. I haven't done a lot of free machining but the basic rule I follow is feed dogs down, darning foot on, stitch set to straight stitch (or you can use a zigzag) stitch length 0. To bring the bobbin up to the top of the work hold the top thread, presser foot down, turn the wheel by hand and send needle down into the fabric then bring it up and bobbin thread will come up. Pull it through and when you start to sew hold both threads to the back of the work out of the way (that is still on top of the fabric but out of the way of the stitching) and then cut off after a few stitches so you don't knot your self up (ask me how I know!). I think you're supposed to have the machine running fast-ish and move the fabric at the speed you want to get the stitch length you want, you are in control of that part. Scary! The absolute key is practise!

I've just bought 'A beginner's Guide to Machine Embroidery' by Pam Watts, at a very reasonable £8.95 from AVG. It has some good effects using straight stitching and from vary-width zig-zag satin stitch, but, I must say I get a bit of a thrill when I drop my feed-dogs and put my foot down and go! A bit like running down hill (But safer!) Love your piece here, it definitely has a watery feel.

Cool! I wish I spent more time just being intuitive like this, just going with the flow...I tend to overthink everything. FME is just something to practice - just remember to move the fabric gently and the machine faster - if you move the fabric fast and the machine slow you may break a needle! I don't bother bringing threads up, I just make sure they're held tight for the first few stitches and then off I go. I trim them when I can get to them, or pull them through to the back and knot them. Enjoy!

I love the colour, and the finished product is gorgeous! I find, for me, knowing when to stop is sometimes the most difficult part. Well done!

thanks for sharing your process-- all the fabric, felt, stitching- adds up to wonderful textured works.

Beautiful piece of work Emma and such a clear description of your progress. Glad to see you haven't got the January blues and are producing excellent work.

Amazing, fantastic and beautiful workx I thought you were quiet and then l discovered for some reason you were not in my "subscribed too" box...so l have just had fun read your last few entriesxxlynda

This is lovely. The secret of successful FME is to relax and don't forget to breathe! The more you do, the better you get!

It looks like an undersea landscape, love it.
jill

I do like the way that you document your stages. I'm glad you got your FME sorted. A lovely piece

These colors rock, but wow! felting can be treacherous!

Thanks for the mention, but i really would prefer you link to my site, rather than Google--it does no one any favours to give them the credit....