It was such a beautiful day today, looked quite calm on the loch so once the B&B had gone we just had to go on a little boat trip. Carpe diem & all that.

We use a shot like this to entice our guests. 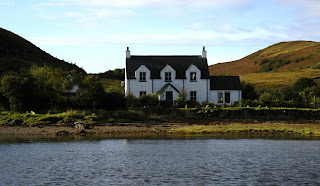 The hill I walked up last year by Loch Hourne 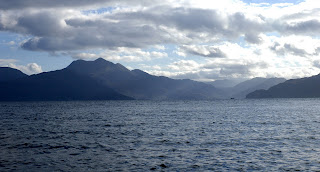 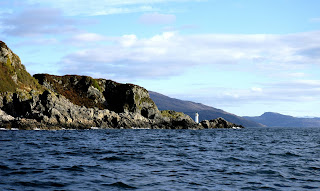 Cows on the hill 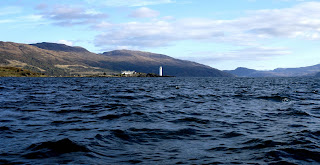 Another boat passing by Loch Hourne. Choppy, no?! 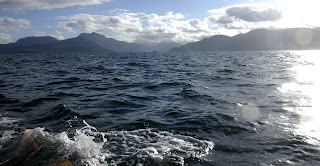 A quick snap of a Cormorant, can you see him against the houses?
He looks toally photoshopped!

I just love this little tree! Very slightly blurred (!) due to the big waves, I think ;)

My little pal, but it was those legs in the background doing the driving! 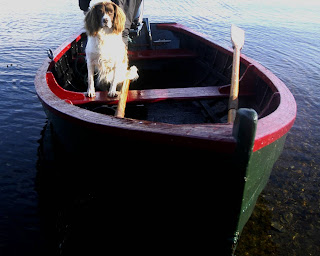 The start of the week

My uncle in law (UIL) & sister in law (SIL) ;) came up last weekend, he over from Co Wicklow, Ireland & she from North Wales, near my DH & her family home on the Lleyn Peninsula. So that means we take time off & get to go out & about around this wonderful Island of ours! First stop was the resevoir hidden in  the hills the other side of Isle Ornsay, about 3 miles away. We drove as close as we could then it's about a mile in along a quad bike track. Except the river crossing the track was in spate & we decided not to try it despite my 2 helpful lads - UIL is 84 next month after all! 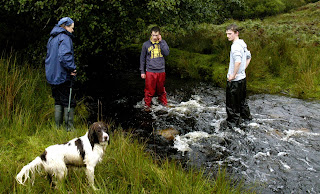 So we went thru the woods, precarious to say the least, lots of fences to 'step' over or go thru, one or two muddy cliffy bits over the river but he was unstoppable so we felt the least we could do would be to follow! 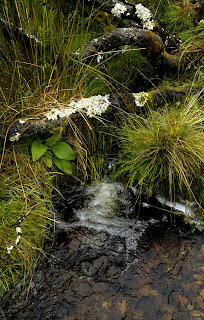 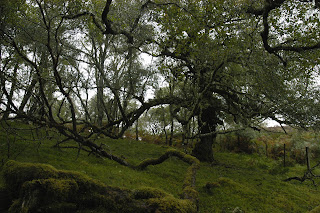 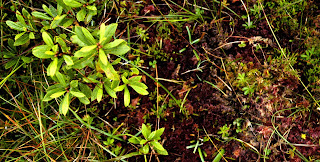 They guided us, were encouraging, stood under us in case we fell down the incline (we would have squashed them flat, but an excellent sentiment!) My boys. 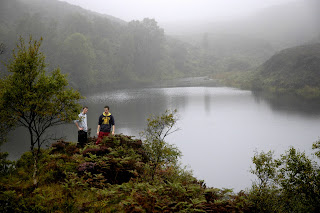 So we arrived, it wouldn't have been as exciting if we'd used the normal path. 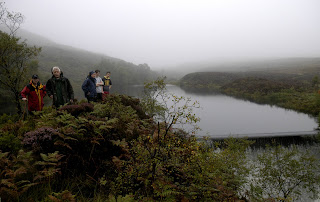 If it hadn't been a wet, moody misty day there would only have been a trickle to see. 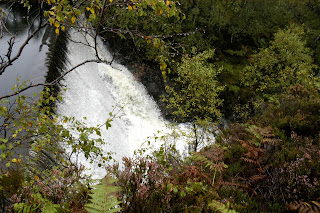 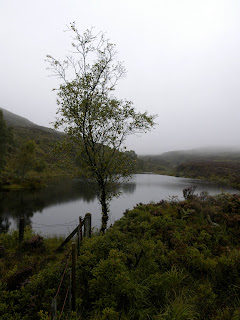 A buzzard's nest on the treacherous journey back.

Maybe we could get a little hydro system going to power these lines.

A few squares - printing with the pill packets, for Jackie, bits & pieces with a big bead tied on, the pill packet stamp itself, some lovely playing with needlefelting - I've been reading my e mag In Stitches - the swallow resist - I saw one today - a flower - I've been making a few of these!
My middlest' GF is 18 next week, so another cuff. He seemed to think she'd like it. ;) 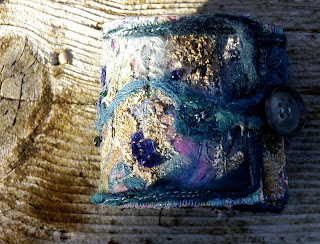 A rather moody  early frosty morning shot. The angle of the sun is changing.

I need to look for some more glitzy buttons, I think.
Slow progress on the bodice front (he, he!) The show is next Saturday!
Posted by Emma at 14:19 10 comments:

The light for taking photos is swiftly disappearing, flash was necessary for the square pic today - I didn't want to drag the 'hanging' they're on thru the rain as even in the greenhouse it's pretty dim. We've had what some people (especially those on holiday expecting views) would call foul weather. Autumn is here, but I just wait for those intense bursts of sun lighting up the sails of those few intrepid boats in the Sound set against the deep purple grey of the rainclouds, followed by a beautiful rainbow, sometimes double, which settles on our village; truly our pot of Gold.

cut up swim suit sticky lable found in that certain place, bit's & pieces on my desk, the power of football, loosing scratchcards, bits by my sewing machine & for Corrine a nod to Beryl Taylor - I'll keep practicing.
Would you look at this top stitching!!!!!! Never been so neat before. I had to unpick one side as I fell off the nipple (can we say that?!) There is one stich that is kinked but as it's a satiny fabric I won't unpick again. The fabric is plain but all the watermarks have show up in the pic. Reminds me of my scientific module at college, photographing crystal growth thru polarising filters. I wonder where I'd be if I'd gone the scientific route in photography instead of the commercial route? 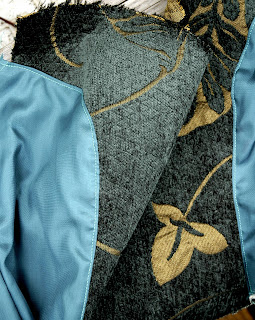 I'm going to have to admit to the Autumn, soon, much as it hurts to say goodbye, only for a couple of seasons, to these. 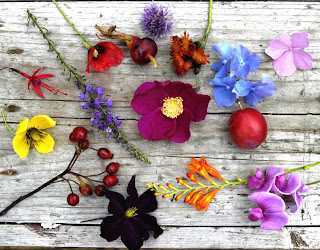 Looking at this pic I took this afternoon I've got to say I'm filled with hope for next year - if I can do it once, I can do it again, maybe even better (I find I tell myself this all the time, don't always listen!)
Just to fill my life with even more when there's already no room left, I did a fabulous 2 day workshop with a costumier called Morag. The workshop was held at Rag Tag & Textiles for the purpose of making a bodice to model in the late autumn fashion show that Rag Tag are putting on in Broadford & Inverness. I don't think I've cut a clothes pattern out since I was at school & i was so excited that i was finally able to be taught & to do something that so many are able to do with their eyes closed. I'm sure it's given me the confidence to try other pieces of clothing. The bodice is coming on, slowly but surely. 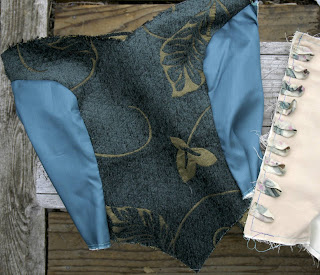 You get the general picture - on the right are the loops sewed on the lining that will lace me in! I've got to do some top stitching, neatly mind, on what we called the learning curve ;) I'll ask my friends for some pics of the class next week. I started a little corsage for the bodice. 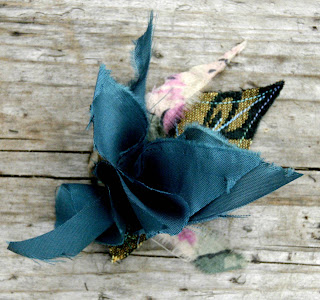 I really learnt far more than just how to make a beautiful bodice. Thank you, Morag, & Meg & Fiona for organising it.
some squares

Another piece of painted Magnum wrapper, coupons out of date; it's all about money, a dried up wetwipe for work spillages, a nod to the swallows on the wire - I had to look at the sillhouette in the birdbook to help with an outline, inspired by Jackie I tried to stitch some empty pill packets, my needle had a little wobbly but it's ok. When you both have asthma there are always empty pill packets of some kind twinkling at me from the waste paper bin! The last square is a variation of a card I was making this week - there's a fish you can just about see hanging there fashioned out of thin red wire.
Too much playing this last week, not enought work :)
Posted by Emma at 14:14 10 comments:

What a beautiful week we've had

Such a sunny week, late summer sunshine after a pretty wet summer. I feel bad for the nightmare of a time going on in Pakistan & New Zealand. I wish I could do something. I made some bags for the Haiti disaster but it was a tiny spek of a thing to do. To avoid feeling completely useless & that it's all futile, I will just have to sit & enjoy my little bit of sun & spare a thought.

I've been making, but I need to make some more if I've a hope in Christmas of earnng a living in the latter part of the year! 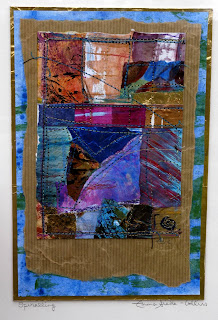 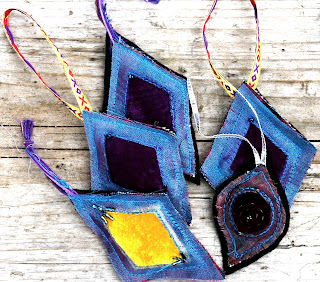 These are all that are left from last years decorations, can't quite see that wonderful deep burgundy velvet in the pic - I shall be making some more of these, as they sell (slowly) thru the year too. 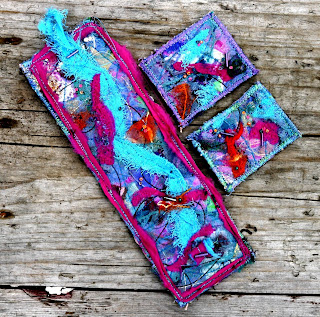 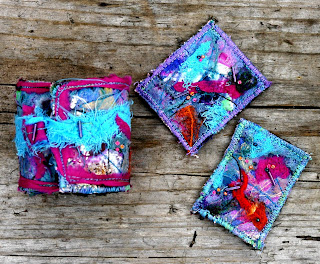 One of the brooches is going to my little goddaughter in Cape Town, SA
And some squares

The first 2 are rubbish out of the bin (at work (I'm such a shite hawk!) then an adaptation of a card I was making, next I finally tried a tecnique from the episode on Talking Threads by Kim Thittichai - I bought a magnum icecream, well, I had to didn't I? & ironed it under some baking parchment, watched it shrivel up then highlighted it with..., yes gold. The m is on the end of the ice cream stick, M is also my loved one's nickname for me. Inspired by Jill, I filled a clear bit of rubbish with some tiny things laying on my desk & ironed it (under some baking parchment) Love the way everything sticks in place. Last, more clearing up my sewing table (a tiny bit) with some needle felting. I've already broken 2 needles, I was warned! (how can little bits of fluff be so strong?)
Thanks for your comment, Angeline. I've tried again to add you to my blogroll but it just won't save it. This link works here, tho, so when you all have a mo, do visit!
Right, off to 'make' some more...& have a coffee in that sunshine before it dissapears.
Posted by Emma at 02:51 13 comments:

A month of squares & a 'panel' of postcards

Well, I've finally found the time & dry weather to lay out all my beautiful postcards in one big group. I had to climb a ladder (& it's still not straight!) & wear a midge hood, they were dreadful as it was warm & still. Any postcards generously given to me by artists aged 15 & under will be in a seperate special frame. ( thanks Ruby & the youngest!) 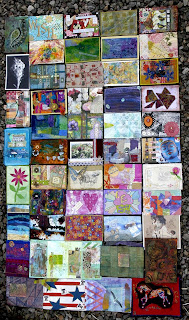 So my next job is to stitch them together. I had an idea that they could spin round somehow so I could read the back, but I think I may never get them up onto the wall if I try that. I'll imagine it's a patchwork hanging, in loose terms, & stitch them together, with intent, meaning & gratitude to all these lovely people who gave me such a wonderful start to my year of being 50.
This might be the final positions, I may swap around a bit & put Corrine's at the bottom, so I can open it out fully. The idea is to mix up the bright with the more calm & neutral ones. Any other suggestions?
I do so love them.
The last strip of squares in August.

Swan vesta packaging, a doodle of a Black Arches moth's markings  while watching gardeners' world, bits & pieces from card making, more delicious paint peelings from the pallet saucer, a card sample & some bark that was laying around by mistake which Tam chewed at - I thought I may as well stick 2 pieces together, use them before he got them again! You know I can't help using strips of gold & then I attached a rusty key hole ( the first time I've used one!) I found it on the floor (where else?!) outside work, but unusually, I had a hand in it finding it's way there. I'd reported that the lock wouldn't shut on the noticeboard. I'd noticed that the key had changed when next I was asked for it & then I found the old lock, discarded, only to be reused by me. Hmmm, I find that quite satisfying.
A month of squares for August. 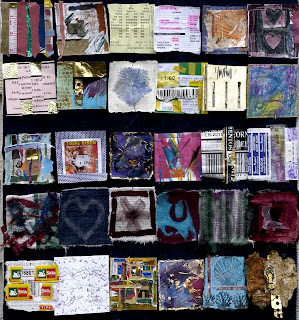 I love the look of it, but I certainly am stuck on grids at the moment. I need to go wild with some more cuffs, I think.
Posted by Emma at 12:52 16 comments: