It's been a sad week.

We had to have one of our cats, Tallisker (Tally for short) put to sleep on Friday, a heartwrenching thing to have to do. She'd stopped eating properly 2 or so weeks ago, then hardly at all a week ago & we took a thin little thing to the vet. She got vitaments & steroid injections but within 5 days she was barely taking water off a teaspoon, couldn't support herself & then became incontinent. It wasn't a difficult decision with all that happening.
She'd been braindamaged from when the cat rescue place found her & a few others stuffed in a bag shoved under a bush & water had got in. I don't think the place knew she was damaged, but when you needed to put her food under her nose for a good few minutes & then she suddenly delightedly found it you knew. She also had a similar thing to an 'intention tremor', as in knowing what she wanted to do but couldn't, rocking back & forth trying, as in getting thru a catflap. Got there eventually, similar to Parkinson's, apparently.
She had the sweetest face, always with a bit of food stuck on the end of her nose, as she didn't constantly lick herself as a normal cat would. Nor did she wind herself round your legs - you had to go & get her to give her a scratch & when you did she practically stood on her head getting into the itch! The moment you went into the room she would purr & she died puring, a tiny little sound by then, but still there. I managed to control myself while waiting - the vet & reception were just great - but the appointment before us was a kitten having jabs, I guess & when she was brought out it really got me. So I thought it would be an apt photo to show of her as a kitten in the arms of my little ones, 16 years ago. 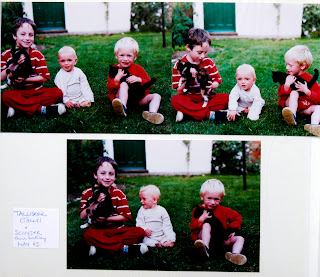 She's the tortoiseshell on the left, this is from one of the photo albums we did in those days. I didn't mean to burble on so much, I know you'll understand how distracting it's been so I haven't done much in the studio. I can't imagine how people cope with their loved humans being ill. What brave people we are. Strangely I thought it would be the black one going first as she got thinner recently, 16 is a good age tho. Sorry to be so sad here, I'll be fine.
So I will have today to catch up on things & start a new piece & these are the flowers to inspire me. 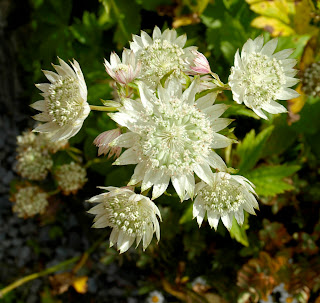 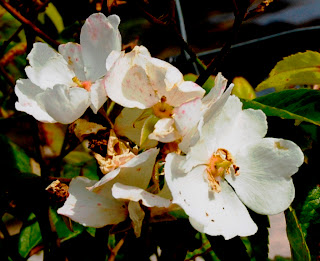 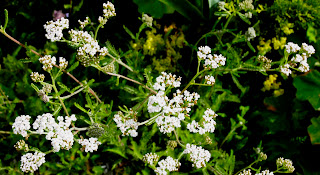 Yarrow
To cheer us up here's a pic of the sweet card our youngest sent from Mongolia. 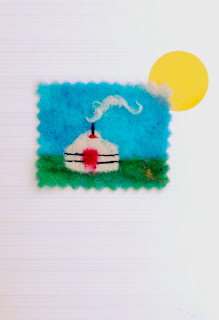 The cut out square is only about 2" x 1", you have to hope tweesers were used but I imagine it's more like tiny nimble fingers made this, I hope they enjoyed it. The other good news is the photos that were lost are now found - there are hundreds of pics of kids sleeping on busses & blurred passing on the bus shots but he's going to make a file for showing the grandparents/aunts/uncles so I'll try & grab some of those. This  card shows exactly the gers they were staying in.
I did manage to make myself go to the talk given by Diedre Nelson textile artist on Thursday night - if I live in this stunning place then I must be prepared to travel for 45 mins up the Island to Portree where most events happen - & was gratified when she recognised me from a workshop I'd done with her making wired flowers about 3 yrs ago in Plockton (where I'm having my exhibition in 6 weeks!) We're to make knitted or textile herrings ! & this knitted shoal will greet a small ship that's arriving in Portree in September as its the year of Islands apparently. This ship is totally covered in mirror tiles, called Celeste & is in honor of the pirate radio Caroline.......I remember listening, I'm sure. Anyway, it's all rather involved so the bit I'm concentrating on is that the fish will be auctioned/sold in aid of RNLI, which is good & it/they will be along the lines of my 'white' hanging with added silver bling...Diedre is part of an exhibition at the Dovecote gallery in Edinbro - I may have to ask my dil to be to go take pics! If you go to her blog & go to pages & then fish exchnge  you'll see what a busy woman she is.
Now I'm off to cheer myself up even more by visiting a few blogs before I get busy myself ;)
Posted by Emma at 04:42

so sad for you .......its devastating losing a loved member of the family.....xx

I'm so sorry Emma. Our pets leave a big gap in our lives when they pass on.

Dear Emma, your post made me cry. I am sorry for your loss. We have 6 cats and all rescue and 3 dogs of which 2 rescue as well.I fully understand how the loss of a pet feels they give us so much. I hope time will heal the pain. She had a good life with you and you gave her all she ever needed. A big Hug for you my dear!
Andrea.

I'm so sorry about your kitty, Ems. It's amazing, though, that she lived to be 16 in her condition. I'm sure you gave her the best life she ever possibly could have had. xox

It's heart-wrenching to lose a beloved pet, and member of the family. Such a sweet sounding bundle of fur who was blessed to have found you and your family, Emma. Hugs

Had a little chin tremor reading about your poor kitty, but it seems she had wonderful life and she has a place in all of our hearts too.

So sorry to hear about Tally Emma, thank you on her behalf for rescuing a little kitten and giving her a splendid life xo

The loss of a pet is like losing a member of the family. Hope you have lots of happy memories. x

I am so sorry for your loss of a special family member and you can burble all you wish. xx

So sorry for your loss Emma, it helps to talk about it and get it out of the system. I also found art to be a great healer after my parents died, it gives you some time out space.

I'm so sorry about your little cat.
She did well to survive 16yrs after her start in life!
I love my 2 remaining cats, they are both 15yrs old.
Take care my lovely,
Hugs,

I'm so sorry for your loss, glad Tally had so many good years with you. I always tend to make myself cry even more by listening to this song: http://www.youtube.com/watch?v=HjespGPhoMw
Goodbye My Friend by Karla Bonoff. For some reason it seems like a pet loss song. Go ahead and cry, it helps.

Oh Emma I feel for you...but wasn't she lucky to have you all those years.
We lost Peachy for 2 days last week and I cried so much.... I was heartbroken. But thankfully he returned (hungry). When we love our pets in the way we do, its like losing a family member. Sending big hugs...
XXXXX

PS What a great name you gave her - very apt for Skye!
(We have a bottle in the cupboard :-)

Sorry about the kitty...it's never easy, even whe they are ill. I have some ink Ashtabula, love this flower, it is so often overlooked, but the flowers themselves are lovely. xox Corrine

So sorry about Tally Emma. I hope you can take comfort in the fact that you gave her so many happy years and that she has left you with happy memories.

aww so sad for you , they are like part of the family, its natural to grieve....

i love the card your youngest sent you too...

Emma, I'm so sorry, and I'm so sorry that I'm late getting here.
It's good that you got to the talk. What a lovely remembrance of your sweet kitty. You made her life so nice for her. Thank goodness for you.