A month of squares only 2 behind

I've finally compiled my squares for the month of June. I'm only 2 months behind, am I bothered? no, I'll get there eventually. Life's too short to stuff a mushroom. What I mean is, there's so much happening, just normal life, really, that my poor guddled brain can only take so much, so anything else trying to get in just can't ;) Simple. (It took me a couple of sleep disturbed nights to work that out, only a couple, honest!) 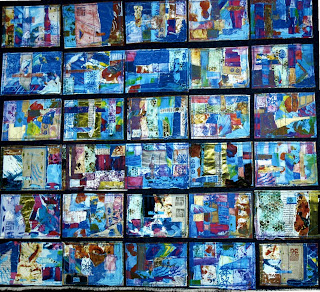 It's not the best photo in the world. After 2 beautiful sunny days here which I spent earning my living indoors, it was truly foul here today,  when I had the oportunity of getting some rays. Sod & his law, I guess. Meh. So, no light. I had a wonderful time tho, using up all the ink in the printer making little baby versions of 42 out of 50 of those postcards I sent around the world to celebrate my half century.  I look at them & can't believe they're my little pieces of work. I look at them all in one big month of squares & I'm delighted.
I might try & find the other 8, I know where one is & I've asked if i can 'lift' it off the blog post it's on. Can you do that? It must be possible otherwise why would people say not to use their images? Can anybody spare a minute to tell me how?
I've also made a strtip of 6 squares, after such a long time - this one's for you, Rini!

Again, excuse the lack of light, there's only so much you can do with auto balance to take away some of the flatness.
Bits & pieces from my box, coloring & stitching on a piece of metal ( tricky trying to avoid it looking like a face in a gasmask!) numbers & letters remains, more box bits, left from cardmaking. So this is the first strip from August. As I said I'll get to July. It took a while to make myself do 'today's' square instead of just trying to catch up with squares gone by. I seem to need order in my life, can't imagine why!
I've made a few cards, they do well in the studio. 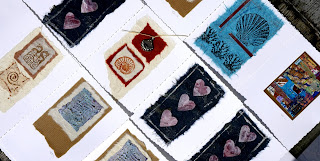 I look forward to using some of this booty I got at the French brocante last month. I'm so envious when fellow bloggers get to go regularly to markets & finally after a while, I got my chance :) 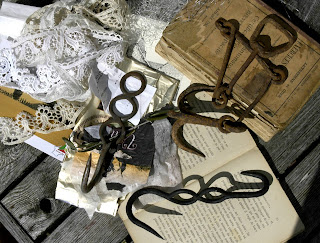 Some lovely lace, books, bits of paper a baby grappling hook (?) & 2 hooks 'crochet' in French, rather apt but I might use them in my greenhouse.
I had fun making a birthday card for my middlest who was 18 yesterday - he had a good night out anyway! - if there's any light tomorrow, I'll take a pic.
'night.
Posted by Emma at 16:35

can't wait to see what you do with your treasures from France.
jill

Wow, great stuff. You have been super, super busy. Nice brocante from France. HOpe you leg is ALL better. xox corrine

I love the collage of your postcards and I'm honored to have one of the originals!

Lots of great work as usual! I'm always amazed at the amount of work bloggers get through on top of all the daily "chores"!

Your postcards look great Emma...love the overall 'blueness'of them.
Your cards are lovely too.
And I'm envious of all that lace and text (but not the grappling hook - although I'm interested to know what you'll do with it, lol !!!)
Hugs
Linda x

What an amazing compilation of beautiful squares! I just discovered you lovely blog filled with such beautiful mixed media work and fun. I look forward to visiting again!

your work is great! I particularly love the strip of the 6 squares and your brocante-founds. I am curious, what you do with this things!

Your postcards look fantastic together like that! If you want to 'borrow' a photo from a blog click on the image to open it in another window then right click and a box will open. You should be able to see "save image as", click on that and save to your favourite folder. Hope that works for you.

Emma , you have done a great job with the cards and i love , love , love your squares !!
I am glad to see them back her , ha ha !!!
Love and a nice weekend from ♥RINI♥

Your postcards look great Emma...love them all - you have done a great job

I don't see the one you sent to me in there, feel free to boost it from my blog. You did such a great job on your cards, I don't think I could have.

Emma I just right click straight onto the image and save image comes up. Left click on that and save it in one of your files.
I'm so pleased to see your squares again and all your cards together ... brilliant! I'm still peeved about the missing card.