Quiet for me. All I made this week were some backgrounds for my honesty seedhead card. 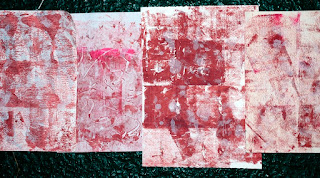 The Youngest had his Prom on Tuesday - not sure why they called it a Prom, I guess coz the 'School Dance' is the winter dance & this will be the leavers prom/dance. No sign of a limo thank goodness!

I'd show you a pic of him in his kilt but even tho I've deleted a few of the very early posts I still can't upload any more pics. The one above snuk in before I deleted them. So I'll probably have to pay for storage, but why can't I just empty a bit from Picassa? I really enjoy blogging but if it's going to get all tecnical.......

The Youngest had to make his first public speech & handled it by making fun of himself & pointing out that he can't speak in public as it stops him breathing ;) We got a taste of it at Prize Giving on Thursday, our very last as he had to make a similar speech, a vote of thanks as Head Boy. He turned into a comedian & just held the floor, we were proud parents, I tell you & not just because he got an award in Biology & PE.... As for passing his driving test that morning (second time, first was last month) There was certainly some stretching of the umbilical cord when he drove off into the distance....without me or hs father!

I can't think unless I've got pictures to write about! Hope I can sort this out soon ;( Here's a link to the Honesty pic I made last year & showed in the exhibition last week & it couldn't be enlarged ( I was trying to save on space!) I'll find the other pics next time. Thanks for all my lovely comments. I'm in the walking thru treacle stage of life at the moment, just pootling along not really doing much (except for the day jb & B&B of course!) I will get round to visit...I've been saying that for a while now!

Such a scary moment when the drive off into the distance. I remember it well. Sounds like all the school festivities went off quite well. I can picture you beaming in the crowd...xox

Congratulations to the proud parents! Let me know if you get around the Picasso issue. I know it's going to happen to me soon and with the rate of exchange i don't think I'll be paying for storage. I also wondered whether deleting a whole lot would open up new space.

Lovely background and sounds like you have every right to be proud parents. Hope you get your photo issue sorted soon.

My Picasa storage is full but I can upload pictures and create albums using a smaller resolution which looks fine, but may be no good if you are using it as storage for your files. I upload pictures directly to the Blogger new post window - not via Picasa which seems to have got round the full storage. If you delete any of your pictures from the Picasa albums and you 'bogged' them from Picasa they disappear from your blog too.
Hope this helps.

I certainly hope you get the photo storage issue sorted, I love looking at your photos. You must be very proud parents - of your oldest as well as your youngest (I am just catching up on the previous blog). I think the best day of my life (almost) was when our oldest got his driving licence and he could ferry his younger brother around. I was no longer the taxi! Cheers

Wow. This is a major bummer. How is it going? Even without photos, I'm coming back!