After a white week I felt the need for some stronger color. I missed taking a pic of a lovely rose, no idea of the name as it was a cutting from one of the gardens I worked in before the joints protested too much ;) So I thought Fuchsia instead & found a total of 9 magenta red flowers but I'll leave the scabious, lillie & new honeysuckle blooms till another time. As well as fuchia, I was inspired by astrantia & the perennial sweet pea. 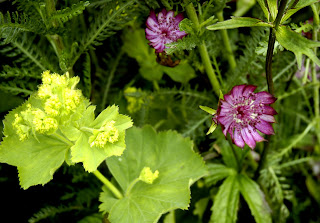 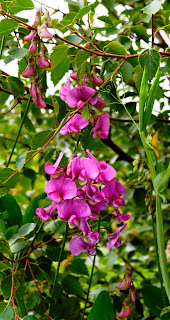 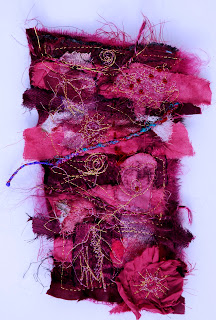 A mix of rich magenta smokey pink & burgundy recycled fabrics
The first hanging, dark fabric for the astrantia at the top, smokey pink for the sweet pea (I can't help that they look, well, just a little rude....) & a fuchsia tucked in at the bottom there. Not sure how well the pink metallic stitching works. Some burgundy/red french knots & running stitch & sari silk couched down.

The next hanging was inspired by achillea, leycesteria & rosa rugosa. 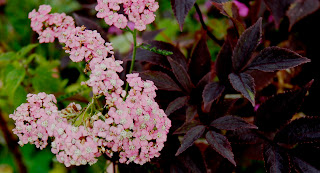 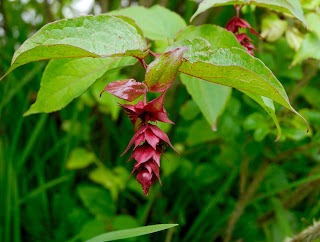 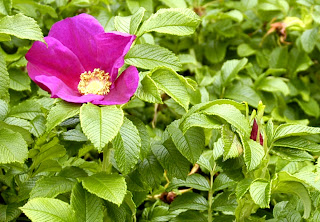 The beads aren't attached yet, todays job along with just a few other things. I wondered a hanging or 2 back how I could 'name' these & decided on a label hidden in a bead 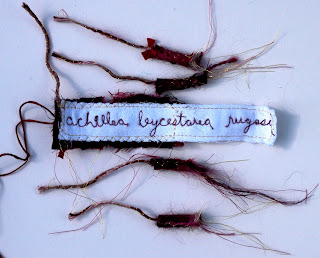 but it does make the bead a little large compared to the others, hmmm. When I saw fm stiched writing, I couldn't beLIEVE it could be done so I'm quite proud of this.  But is this Naive Art, a joyful exploration of different techniques or just a little slapdash?
You can tell the nerves are fraying - it's 4 weeks today & I'm not ready....yet & it's getting a little more difficult to quell the rising panic, but at least it gets me running around like a headless chicken finishing things off! Good, I guess. There's so much I wanted to do, to prove I could & I suddenly realised I could have another exhibition one day, it doesn't all have to come out of my head into this one .......did I really say that?!
Right, I'll come back later & catch up on some lovely blogs when I've finished, mounted & framed a few things!

Lovely colours from gorgeous inspiration! You'll get there in the end, one day at a time as they say!

So good luck on the exibition. The work coming from your studio is really coming from the soul. Nothing slapdash here. xox Corrine

dear emma, magenta is a great colour und your works are so fantastic. I love the flowers in your garden and your compositions!
have a good new week! mano

Beautiful dark pinks! I love them.

These are continuing to turn out wonderfully. Will you be displaying the flower inspiration photos as well as the finished works?
I love your idea of the title of the piece enclosed in the rolled up bead, that is a nice touch, unusual. I find these pieces to be a wonderful series with serious thought put into the creating while leaving you free rein to create from your subconscious, free flowing work. They are very worthy.

Gorgeous, gorgeous colours and beautiful plants. Your exhibition will be fabulous. Penny and I were talking about you at FOQ this week and she painted a lovely picture of staying with you. :-)

The colors are GORGEOUS!!!! This is a beautiful piece...love clicking and seeing your work up close!

What gorgeousness. I do hope you are going to be able to show us the full series. I'm sure the exhibition will be a great success.

I love these and I was going to ask the same as Jan. They would look so lovely in the exhibition with the inspiration photos adjacent.

I love the pink!
jill

You will get it all done. The machine writing hidden in a bead is great. Maybe make the other beads fatter if you would like them to match.

Love the pinks! hope your exhibtion is a great success - I'm sure it will be.

Everything lovely and colourful! would love to see your pics in a larger size - they are too good to be in a small size!!

This work takes my breath away. I love the colours and the way you have used the materials.

I'm so impressed with that stitched writing!
And I agree with Ju....you should alter the size of the photos of your work :-)

DEFINITELY a 'joyful exploration of different techniques'!!! I love the label tucked inside a bead - beautiful and intriguing hidden things really appeal to me.