Had a wonderful Mother's Day last Sunday, despite there being no kids at home. They rang in reverse age order, the Youngest all the way from Australia! The Middlest sounded like he got up specially & when the Eldest rang, asked if I'd received my card & as I hadn't he thought it might be the fact that it had a 2nd class stamp, hmmm. (Wondered how the youngest knew it was mothers day in Australia & discovered it was the sweet DH sending out texts ;) I thought I'd chat to my dil to be too, as altho she's not 'in law' yet she is 'daughter' So I was specially delighted the next day to find her name on my mothers day card  too, next to my son's. I was absolutely over the moon when he called that evening to say they'd chosen a date to get married, May 3rd 2014, next year, plenty of time to plan! It'll be down in Eastbourne, near my dil to be's parents. A real happy focus on the horizon. 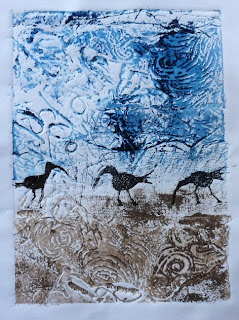 So, college yesterday was my most strenuous as thru the week I compiled backgrounds on which to print the lino fish below & the Curlew birds, above, only I hadn't carved the lino birds yet. I've been looking at Curlews till my eyes watered trying to draw them,to get them 'right'. I ended up carving more quickly than I'd have liked, they just had to be done as we mount up our work next week & then that's it. Which is why there is a rather naieve look to the little birds. I'd wanted some 'serious artful' birds, real art, but really I find these little sweeties quite endearing after all. I'd pulled 2 collographs with a pale middle bit so the birds would show up well 'on the waters edge' 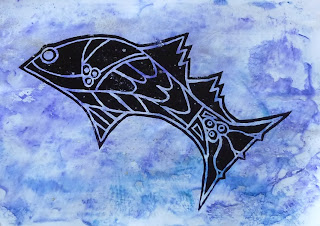 The fish above was printed on watercolor grounds which I sprinkled with silver acrylic powder then smooshed together in a mono print type way & pulled apart. The purple doesn't really show up here. The 'real' piece with the fish was a collaged ground of collographed strips of paper then stitched. I only had one go & there was a little 'pouncing' needed where the stitching had resisted the ink too much but hopefully it'll pass, gulp. 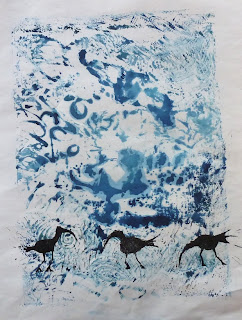 These birds were printed on a clean up sheet you've seen before from the collograph but it works for me. The 'real' birds piece was on a collaged mono print ground shown a couple of weeks ago but i think that post mysteriously disappeared.... left behind along with the fish to dry. The most difficult thing will be to write up the stages taken towards the final print, I think, but now I've done it I should know what they are, as for the annotations on the back of the print or in the sketchbook, well........! (I had to ask, Teach said write your observations of what worked, what didn't, the dictionary said annotate means 'to add notes of explanation' oh, I'm constantly writing notes, is that what I've been doing!) So I can sleep easy now knowing all that needs doing next week is mounting. 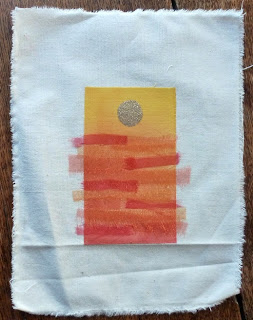 My sample from Wendy Dolan's 20 mins workshop last week. she kindly prepared the ground for us & at high speed we added toning organzas onto bondaweb to stitch later. 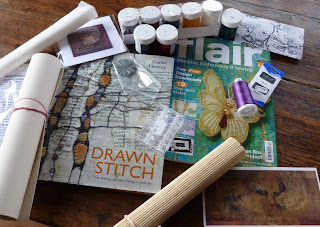 Above are my purchases from the show, stitch & sew & lovely screen printing inks & purple thread from Wendy, solufleece & sticky 'Vilene' for a book cover from Kim T, a beautiful card by Helen,  just below them on the book some metal templates from Margaret Beal, below them spare bobbins, needles, (there were 2 packs), you can never have enough needles, an old Flair Mag from the Quilters, couldn't resist that butterfly, a lovely card from Kerry Mosley & a card the DH got me from the Hunterian museum by Whistler of 2 peacocks fighting, a wonderful sketchy sketch for a big piece. at the bottom a felting mat of a controleable size from Val Hughes (See all links on last week's post)  Last but not least a book by Gwen Hedley that I've been dipping in to each time I went into Waterstones in Inverness until they stopped carrying it - the mixed media department doesn't really exist now with only half a meter worth of 'craft' books, shocking really. Anyway, bearing in mind I'm making a mark book, hopefully among other things,  & this book is called 'Drawn to Stitch; line, drawing & mark-making in textile art' what about it is not to have? Join me while I work my way thru it. (now there's a challenge to myself!) 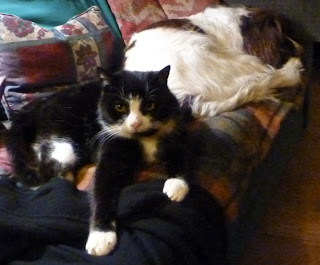 Willow is settling in nicely, thanks for asking. (a little blurry. sorry) Tam wouldn't move his head, not usually shy of photos but his nose is a little put out of joint, lots of extra hugs needed around this confidant cat. I had to put her out while writing this as she walks over the key board or constantly demands one hand for scratching her chin. 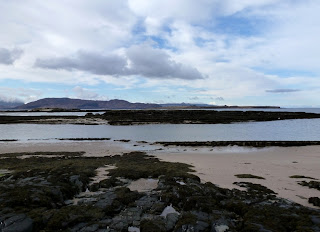 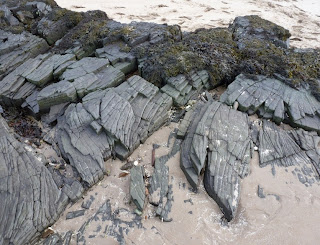 A refreshing walk on a  beach near Broadford at Ashaig, such different rock formations than ours down the road. We were in the area,  looking in the Byre, an Aladins cave of bric a brac, for a door to make into a table under the window in the studio for my sewing machine  but he only had 4 paneled ones, too many dips. I wanted a door made up of lots of lengths of wood, can't remember the name, a Z door turned over, like the one I've have as my desk for over 15 yrs. We have a 'shared' MDF table, nicely painted as well so it looks like a trip to Jewsons much to the DH'd relief for more MDF, he didn't fancy struggling with old warped doors!
Posted by emma-alittlebitofeverything at 13:42

I think your bird carvings are great, lots of movement in them. Good luck with the final class.

A packed post and lots of goodies. I like the look of the piece you started with Wendy and I'll look forward to seeing it stitched. I've been thinking of buying Gwen Hedley's book too. The beach looks beautiful. I think that's the beach we'll be on in September. :)

I love the backgrounds you made for the curlews.

PS I meant to say, what a lovely Mothers' Day and wonderful to have a wedding to look forward to. Willow looks very content. We'll look forward to meeting her.

I love your lino birds! A great Mothers' Day, sounds like. WooHoo on the coming wedding! That's exciting.

Just love those birds - and the backgrounds, I really want to have a go at collographs. I've got that book too! I've done a few of the ideas, I like the leaf skeletons on brown paper idea and need to try that. Eastbourne next year! We're 20 minutes away :)

Lots of interesting things going on there Emma! Like the photos of the area as well!

A wedding! How exciting!

And - how about that dear DH sending out texts to remind the "children!"

What an exciting post. I too love the curlews pictures - you really capture their movement I think. Great fish - I'm glad you have made notes along the way, I am bad about that, I start, then forget half way through and several weeks later can't remember what I did! I have the Gwen Hedley book too and always mean to work my way through it, must get it out again.
Lovely to have a wedding to look forward to. Cheers.

Emma, so much going on and you are still able to create art! Congrats on the future wedding....weddings always add such excitement to the air. Gwen Hedley's book is amazing. I hope you get to work through it all the way to the end. All the best to you and yours. xo Carole

Lovely Mothers Day to you and happy news bout your son...I expect mine might be doing the same in 2014 as well but no dates set...Lovely work and great stash of
purchases....I'd like a lok through of Drawn to Stitch....xox

I like the primitive style of the curlews. That is an amazing haul from the show. Gwen's book is a really good one too.

Lovely post Emma....and I agree with Maggi; I think the curlews are lovely.
I think Maggi and I did a Wendy Dolan workshop at either the FoQ or the K&S Show last year. I bet she'll remember...
So glad to hear Willow is settling in nicely...so we both have rescue cats!
How wonderful that you have a wedding to plan for, I am quite envious. By the time my two get hitched I'll be too old to join in with any celebrations :-/
I also have the Gwen Hedley book; its a good one. I did one of her workshops at the K&S a couple of years ago. She had a great stand there...
XX

Beautiful carved lino cuts Emma! I love how they look with the lovely backgrounds.

Only just caught up with this great post. Emma. I love your curlews, they have lots movement. I've got the Gwen Hedley book, it's great to dip into.

oh emma, your last posts are great!! I love the things you do (so creative!!) and I love the book "drawn to stitch"! wonderful inspiration!
I have a translator again...!
have a beautiful sunday, :)) mano