Well, just not going to my 'weekend' job this week, which means 2 whole days extra in the studio ;) So of course that made me a day later than usual posting with no threat of a 9am start. I momentarily lost my 'sieze the day' attitude! Well, we did unusually have  B&B guests, great weather for them & very welcome indeed, so there's my excuse. 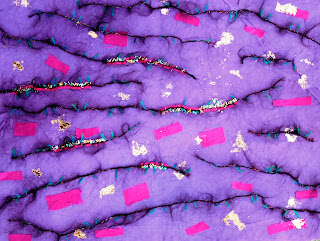 So, a while ago I got a commission from the landscape artist, Pam Carter - she has a lovely holiday home a few doors down from us - & thought it was about time to stop provaricating (sp?) & get on with it. Thing was she asked for a gauntlet cuff & I haven't done one of those before so lots of thought & procrastination necessary before getting down to it. Glancing at the very gory Sparticus that the boys were watching - the Middlest came up for a visit - I was inspired by the Gladiator's leather gauntlets! Then I couldn't find the measurements, Heaven's sake. That meant picking up each item on my desk & table in the studio, putting it in it's place (& a place for everything!) & about 150 items later, after the Youngest said it would have been clever to have clipped it to the bundle he was holding, but never mind (he's so PATient! The DH came in, took one look & left again!) He went over to a box & I said it would unlikely be in there but wondered if I HAD  been clever enough to actually put it in the box (my tidying off the shared table to give the DH space box) & there it was. 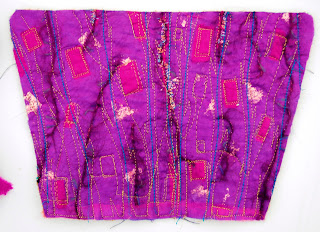 In the first pic I fused purple silky fabric to an old guest towel, the likes of which people of my mothers generation would have put out when they knew guests were coming - my interpretation of batting. Then I laid whispy yarn all over, then I tried to get between the yarn with bits of magenta silky fabric & poked at them with the tip of the iron to fuse them down, then tried to get between all that with little bits of bondaweb that I could stick I mean fuse gold foil onto. I know, a about t but that's how I work;) Otherwise how whould I know what went where? ;) The pic immediately above had a piece of pink organza laid over & I've stitched along the yarn & around the magenta oblongs. I started the piece as one big piece before I found the measurement & would you believe that a guest towel, lightly trimmed each side is the exACT width required for this cuff? (bearing in mind I wanted the stitching to go top to bottom) cool, huh? It's a good thing I made a paper template as I'd no idea a gauntlet would be this shape, surprising how much fabric a 'tube' takes up. 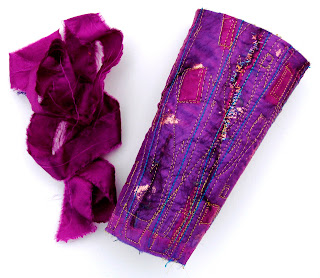 Not so cool was that when I decided to free motion embroider some little circles here & there, to balance up the linear feel of it, garnet stitch I believe it's called, just before I got down to making some loops out of the magenta 'ribbon' & 'buttons' out of the spare fabric, I dropped the tiny screw that changes the feet of the machine, onto the floor. Well I just wasn't going to go there & came in to talk to you guys, instead. I will find it.

In my clearing up parts of the week I wondered why I had so many plastic bags in a large pile. I realised they were for ironing into 'paper' & figured if I got on & did that the pile would shrink dramatically &  could be stored in the 'paper' drawer. Result ;)

I mentioned to the youngest that life was about moving things from one place to another & he found it a rather depressing thought. I must also mention to him that it's what you do inbetween times is the important thing. I think he knows that. He was cheered up by the rugby - in this house where we're English, Welsh & Irish by blood, live in Scotland,  honeymooned in France & also love anything Italian, we don't really mind who wins ;)

Loved your definition of life! Reminds me that clearing out clutter is just putting it into tidier piles!

I love your procrastination :-) and the cuffs lovely too. You've certainly worked hard at it ;-)

You do such interesting things with fibers. I love it! You'll find your screw and that cuff is gorgeous. I like all the bright colors and textures. :0)
Well, I must get back to shuffling my stuff around today. haha! It's burying me-time to tidy up!

I love your working methods! The cuff looks really clever, I wouldn't know where to start with something like that at all. And completely understand about how life is one long moving things from one heap to another...I can fill hours and days doing just that!

hehe, the cuff is gorgeous , love that you recycled a towel :) i used to be shifter now im a purger :)

Emma, your work is gorgeous!

May I respectfully suggest that you go out and buy yourself TWO SPARE bobbin screws! And put them in a well labelled little jar! I have mine in a "make-up sample" tiny jar the chemist cosmetic counter girl kindly gave me. I keep it with the spare feet for the sewing machine. I can guarantee that once you own spare screws you will never loose one again!!

Emma, the cuff is gorgeous! Your choice of stitches and colours are beautiful. You have such a way with storytelling. Have a great week.

Quite pretty colors and what a lot of work. I love all the texture in it. xox Corrine

Love the gauntlet! I've been spending days moving my supplies from one pile to another, from one box to another, one room to another...in my attempts to organize the sunroom as my new work room. I've more piles to go....! lol

You made me smile today with your words (and such BIG ones too!)
The fabric piece you created is absolutely beautiful (no matter what the method;-)
Now go and find those screws.....
XX

Great Gauntlet. I hope you made two at once. Remember the batting I sent you with the dooleybobber? I wasn't actually thinking of it as another gift, but rather, I was just using it as filler in the quilt so it wouldn't get squishy folds in it during its journey across the big water. So I was amused that you thanked me for it as another gift. But glad you liked it.

I do hope you have found your bobbin screw by now! I do love the gauntlet, colours are super. I have been moving things from one place to another in my workroom too - not very successfully, I think lots needs to go in the bin ...........but, just might be needed! Hope I can post this, I have tried several times using both Firefox and IE9 with no luck so far. Technology leaves me cold sometimes. Cheers

Oh, wow, I don't even know much of what you're talking about, because I don't fuse or bat or even much sewing. But I DO know awesome colors when I see them!

You always make things in colours I love. The gaunlets are amazing and I love the cuff as well

I've just passed on the Versatile Blogger award to you. You can check out the details on my page if you wish.
Please don't feel obligated!
xoxo Kim