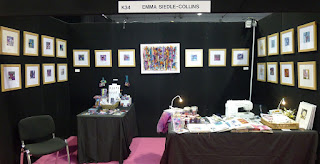 I've had a fabulous few months, busy of course, getting ready for my second go at having a stand at The Creative Craft & Scottish Quilting Show (used to be called Creative Stitches) at the SECC in Glasgow. 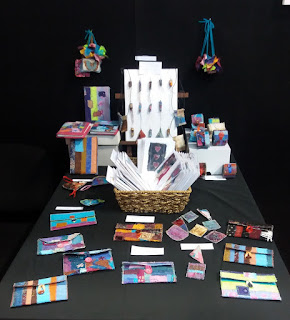 If you remember last year I bludgened them into sponsoring me with a demonstrators stand - I just felt that the time had come, it was a step in the right direction, as I myself had been inspired by people like Lynda Monk, Kim Thitichai & Wendy Dolan, who were there last year but missed them this year - I think the same show was at the NEC the following w/e. Val Hughes was there tho along with Helen McKenna & Bex Raven, a great selection of textile peeps, also so many beautiful quilts but guess who was too busy talking about their own work to take any pics? 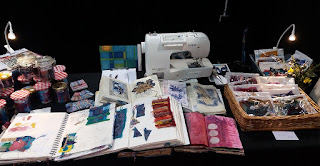 Sorry! If I'm invited back next year I will take some, I promise ;) 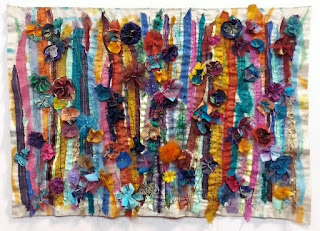 'A Summer Meadow' above,  was finished just in time, on the stand of course ;) I made over 90 flowers, it turns out, just while relaxing with some tv over the last few months - lots of them were made chatting with  the family over Christmas in Ireland & the Youngest said he couldn't go anywhere without a flower being attached to him somehow! 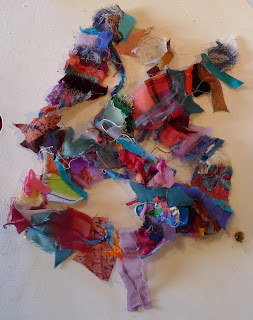 At last year's show I was given at the last minute a corner stand, open on 2 sides  with a metal pole in the corner - it meant I lost a wall but had more 'people passing' space, but i had to do something with that pole! I made bunting of course, above, a 1/4 poles worth for each of the 4 days, just gathering bits of fabric together & stitching away. 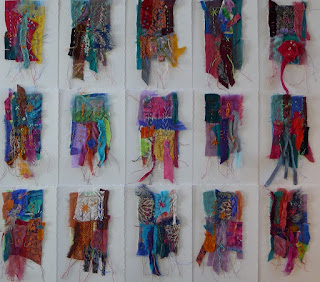 I enjoyed looking at it over the summer but by the end of the year I decided it needed to move on so it became 15 kinda crazy cards - they did well, I'm glad to say.


I'd been watching on fb lots of beautiful examples of snow dyeing on Maggie Grey's Workshop on the Web Group page but was quite envious simply because we had no snow up here, well, a smattering ages ago, see my lovely snowdrops below. 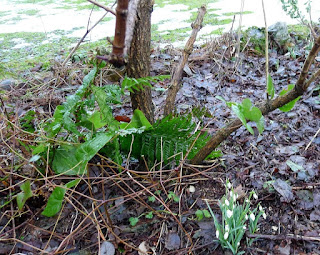 I didn't dare go to the actual course page (for those who are members ) as I had soooo much prep to do & I might have been just a little distracted. On arrival at the SECC in Glasgow, tho, I spied piles of deep unmelted snow (just there on the middle left by the white canopy)

& inspired by my textiley friend Jenny visiting me, I said that if i could find some Procion Dye at the show, I'd give it a go in my hotel room. GillianCooper Studio did not let me down.

Jenny, who very sensibly had gloves & I shoved some snow into the (ex display) basket & into a bag. It didn't leak in the lift, thankfully 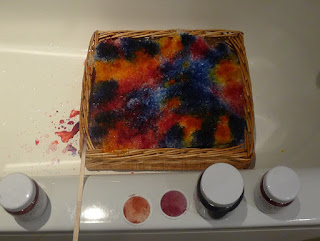 & it all washed out of the bath in the morning 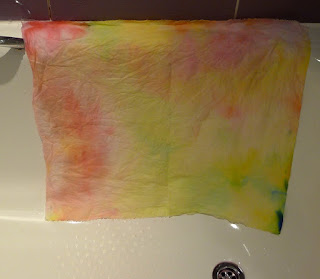 It was a bit 'peeley wally' as the Scots say up here but the fun this time was in the process.

earlier  in the year, when we actually did have a tiny bit of snow, the Knit (stitch) & Natter group got together a few lengths of knitting & fabric 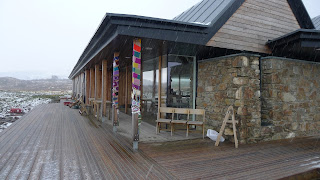 & it somehow made it's way ont o the posts outside the cafe at our wondeful community building to greet the customers when it reopend in January - graffitti knitting in Camuscross! they've now been made into scarves to keep lucky peeps nice & warm in this chilly March.

I was delighted to be asked to run a couple of classes at the local college, the first was an afternoon of monoprinting - the best comment I heard was 'how have I managed to get this far in life without monoprinting' We did a bit of a comparison between a glycerine & gelatine plate made by me a la Linda Germaine  who I've been following for years & the bought Gelli Plate -both are very generous in sharing fabulous clips, mesmarising to watch & learn. 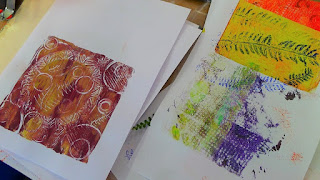 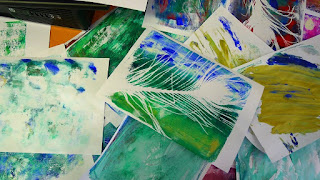 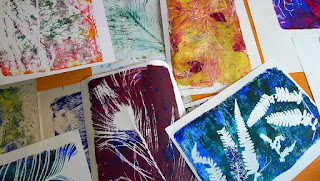 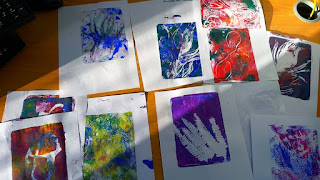 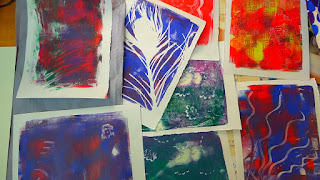 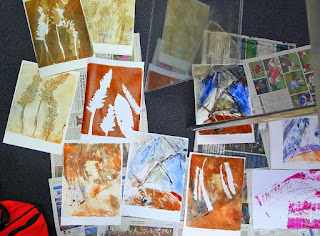 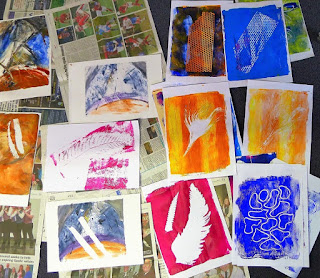 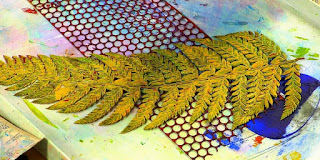 Not bad for 3 hours work - I had only 3 ferns in my garden & they gave some beautiful results along with lots of other bits & pieces I had fun finding in my studio for the class. I provided cloths for mopping up & one student really took the value of these precious cloths to heart, below. The next pic is a piece of lace from a blind, so guite strong,  piece of art in its self. 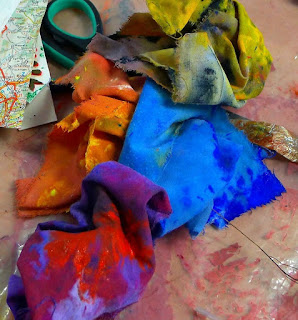 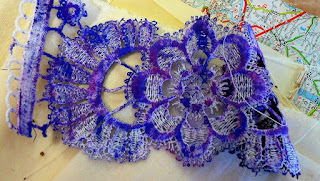 The next couple of classes I gave was based on my meadow piece - there were 5 but one got away. Great fun making lots of flowers from recycled ribbon, straight stich & 'ruched' against a knot, so satisfying & my favorite, simple straight stich in a circle in a square or 2 of recycled fabric, pulled against the knot & it becomes a flower, magic. Lovely work. 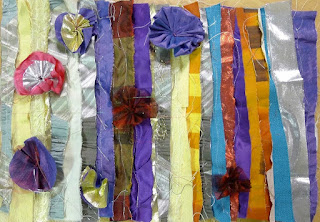 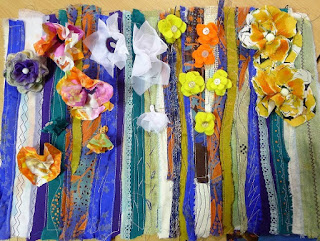 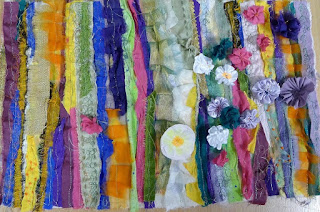 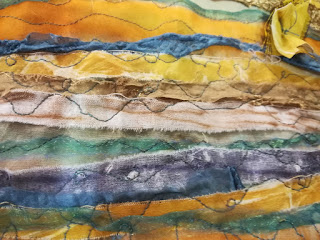 So that's the end of my quiet winter, B&B season starts next week! I have the great excitement tho next month, of visiting my grandson for his first birthday, Deacon is one already, unbelievable......I just can't wait. 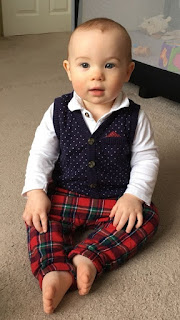 Nice to catch up with you, Emma! Some beautiful and creative work you have been involved in, as usual. That grandson, what a handsome little man he is! Gelli plate printing is so fun and addictive, I'll never be able to use all my papers but it is fun trying.

What a lovely catch up posted thank you for visiting my blog. I have been very poor at updating it. Keep thinking I should start again and write about my weaving. You've made some beautiful work and i'm glad the Show was a good experience for you. Gelli printing is great fun. Your grandson is gorgeous! We will get to see our 10 month old grandson in April too and I can't wait :-) xx

Lovely varied post as always! Specially love your "crazy" cards. And snow dyeing in a hotel! I wouldn't dare, I'm too messy. Shame it didn't fix well, did you use soda ash?

Exciting times and great fun with those flower pieces and dye work. Cute boy your grand....I am sure you will be thrilled to see him. xox

You've been very productive and varied opportunities. I would never dare dye things in a hotel, sure I'd end up with rainbow bath or carpet!

thanks for sharing this wonderful blog.we are very thankful for this article.