A Podcast & the Stitching Show, Glasgow


After a while absent, it's good to be back here, especially when I can tell you I've just been interviewed on my first podcast! The lovely Tania Ashton Jones of TJ Frog  makes beautiful Dorset buttons - I remember when I took her workshop last year I thought I'd never be able to make anything quite so neat, but  I did, thanks to her guidance every step of the way. I'll let you know when she's gone 'live'. In fact it's that which spurred me on with writing this post (which of course has been in the making for a very long time)

EDIT here's the link - if I sound a little over annunciated well, I am, I was terrified I wouldn't be able to speak (not like me at all!) 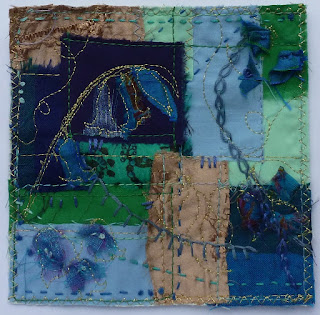 Bluebells in the Wood

The other thing that encuraged me to get on with it is the fact that this time next week I will be setting up my stand ZE12 (with the help of my lovley DH) at the Stitching, Sewing & Scottish Quilting Show  at the SECC, Glasgow. I felt, over a year ago, that havng been to the show for many years to stock up on supplies & be inpired by the lovely group of textile artist there, it was about time I had a go myself so was invited to show & demonstrate my work. What an exciting opportunity (& I get to go to the show as well!) 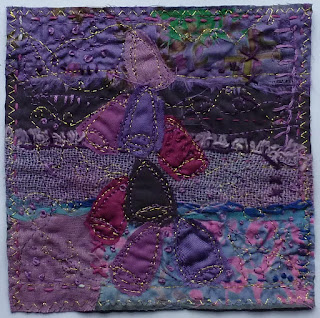 During the Podcast we talked about lots of things - I was terrified & excited all at once as I DO NOT like speaking in public (I did put a pretty top on & some lippy to give me confidence ;) If I sound like I'm over annunciating, well, I am, just in case I stumbled all over the place. We talked about my own squares, see all pics above 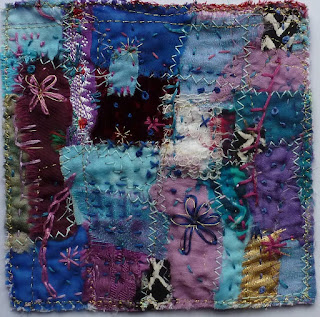 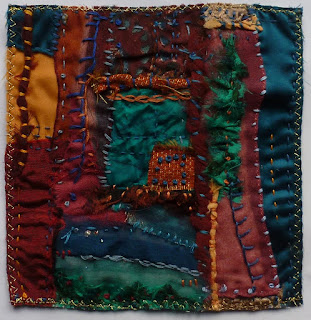 The ones I was making each week for a year, just finishing in time in the middle of November.

We also talked about the community project I was invited to help run at the beginning of last year on the Isle of Raasay which I'm delighted to say was beautifully unveiled & even got me a small pic in the local (well, Highland) paper.

There's me in the corner under the 14x5' hanging.

Another community project I've been involved in has been for our own new building at the top of the 2 villages here called An Crubh (ann crewve) which means hub of a wheel, literally, but it will become the hub of the community & officiallly opens on March 23rd with a shop & post office, a cafe & a huge community hall. 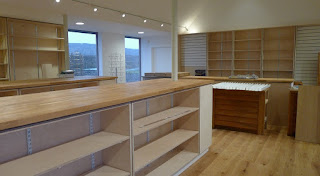 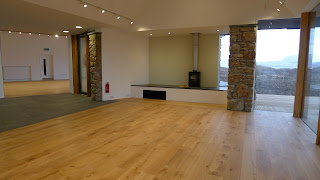 
The project has been, of course, squares, & there have been quite a few small workshops of people gathering together to make squares in lots of different styles. It's a small fundraiser but instead of raffling it off (having received a contribution per square) it was decided to hang it on the building as a reminder of the fun we all had making it. I'll post a pic when it's finally stitched up, but here are 3 of the 40 below!

I coulnd't resist, I just had to go to the very first Yoga class there despite it only being a few weeks after my shoulder op. I only used 3/4 of my body & oh my goodness, you could tell I hadn't been doing much! Proof that I need to get back to it as soon as I safely can. This pic was the second class, there were 18 in my class! I plan to try my first headstand post op by Midsummer's Day - the surgeon did say it could take 6 months & altho he's signed me off the physio therapist has kept me on 'assisted exercises' for a further 5 weeks ...... At least I can drive now, doing the gears very gently. 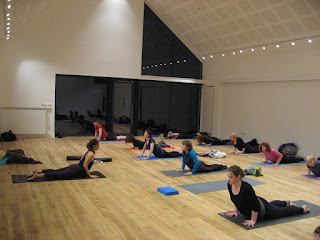 Prior to the op I was working madly on textile pieces, some reconstructed fabric below destined for a book cover, a purse or 2, a cuff & a heart or 2 - nothing like a production line when you're on a time limit!

then, so that I could sign all my wall pieces before my op (I thought I'd be really strapped up & not able to write, but I was on the stretching before I even left hospital!) this happened! 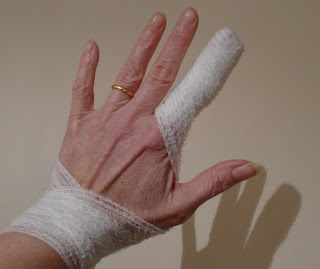 I was mounting away & altho I was careful not to put too much pressure on the shoulder holding the ruler, I left my finger hangingover the edge .....Only because I was having an op in the not too distant future (infection risk!) did I end up going to A&E for 3 stitches but it healed up beautifully ;) 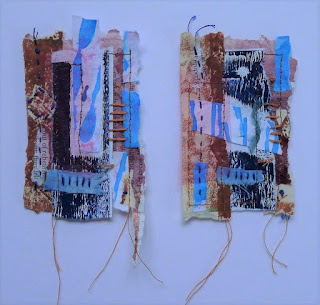 My first lot of creativity of 2017, birthday cards, the first one being on the 6th, a special person who gets the prototype & for the first time I was late but I did manage a very slow stitch.

If you've got this far, thans for reading!

So good to see you back Emma, but sorry to hear you have been in the wars! I am rushing to prepare a meal but intend returning to this post afterwards to sit and enjoy the read.

Good to see you back! Have a fabulous time at the show. Keep something close to hand to nibble on and wet your whistle. You'll need it!

Lovely to see you back blogging Emma and what an exciting time you've been having! I hope your shoulder keeps making a good recovery and I'm looking forward to hearing the podcast. Your new shop and community centre looks wonderful. I keep thinking I should try some yoga. My mum used to do it and whenever they had the quiet time at the end she would nod off. Hopefully she didn't snore.

Great catch up Emma! Look forward to hearing the podcast - how brave. Bet the squares look (even more) amazing framed. Will be thinking of you next week.

Congratulations - how wonderful to be part of a podcast - and taking part in the show in Glasgow. You must be feeling very thrilled, but it is well deserved.
I love your little squares, my favourite is the Ferns one.
I imagine you nearly had a heart attack when you s,ided your finger soon before having surgery. The doctors over here will not operate on bones if you have even a hint of a scratch, my sister had her shoulder reconstruction postponed twice because she had nicked he skin!
Have fun in Glasgow, look forward to photos on a blog later. Cheers

Lovely to see you posting and podding

Good to see you back! Have a fabulous time at the show. Keep something close to hand to nibble on and wet your whistle. You'll need it!
please share it.thanks