Where have all the leaves gone?

It's amazing the time passing thing, one minute you've got your nose to the summer season grind, the next you look up & all the leaves have gone & there's a sugar dusting of snow on the hills. That's why it's so important to look up occasionally....so I do 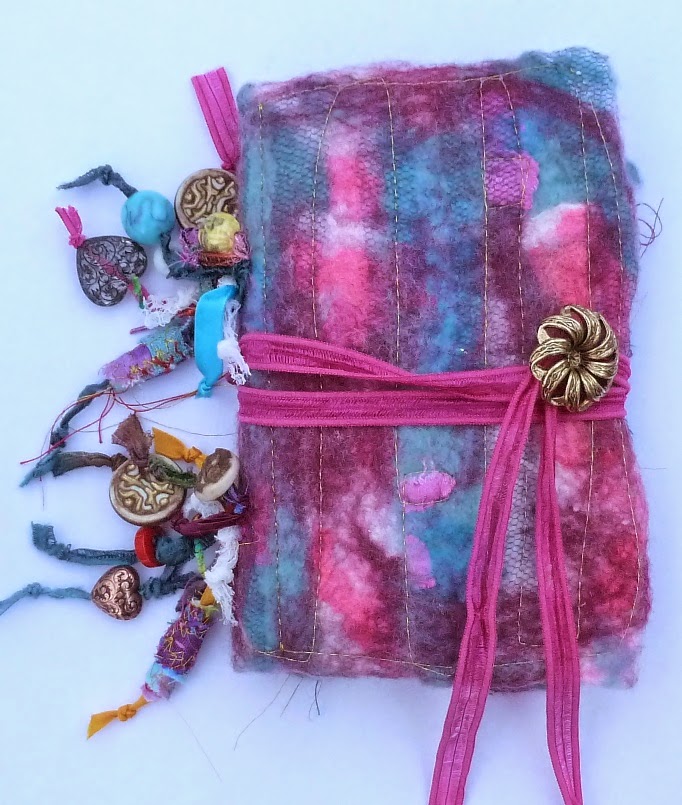 I so wanted to be involved in the Workshop on the Web sketchbook auction, a fundraiser for Teenage Cancer Trust but I had a craft fair or 2 to finish (& start!) things for. Every spare moment had to be for making, only because I'd left just a few too many things till the last moment...... 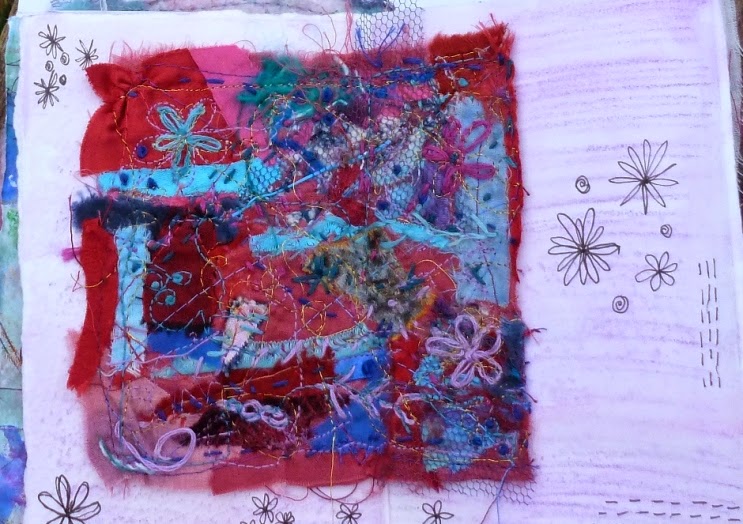 Then I slipped down the wooden stairs, only 4 of them, in my wooly socks.... bruised below my bum & bruised above my bum but I seemed to leave my arm behind & gave my shoulder such a good wrench! Missed my coxyx, which was good, didn't break my ankle in 3 places or my back, even better (the stories you hear... I carry my sock with me now ;) 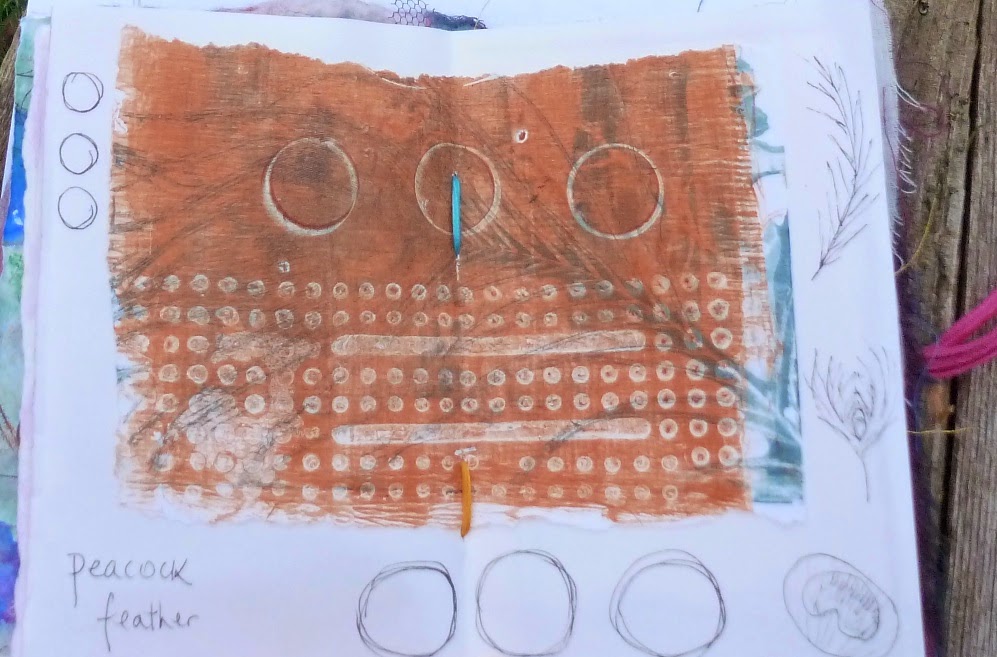 One week on & lots of pain killers later I got the 'coughing your guts up' leurghy, goodness, more painkillers for the splitting head & chest! & more reason not to make a sketchbook. 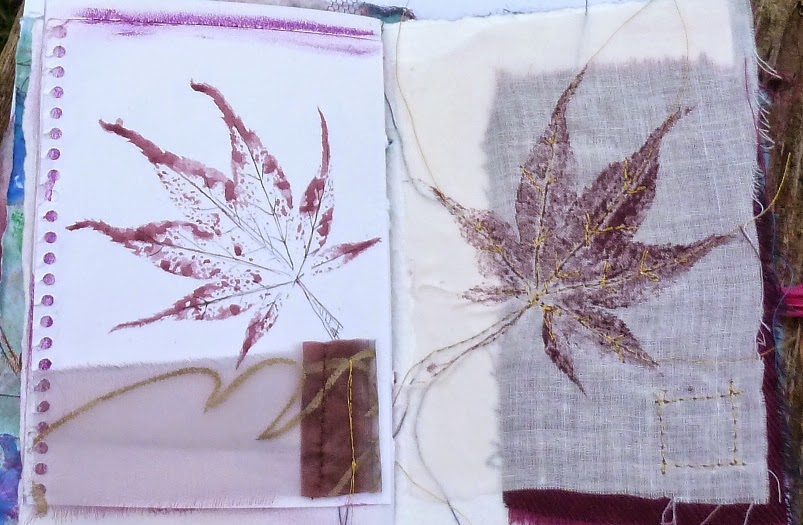 At last, a real day off no pressures at all! Inspired by the beautiful books I saw coming in to the WoW fb page & the fact that I wanted to be part of it, I started to make one. 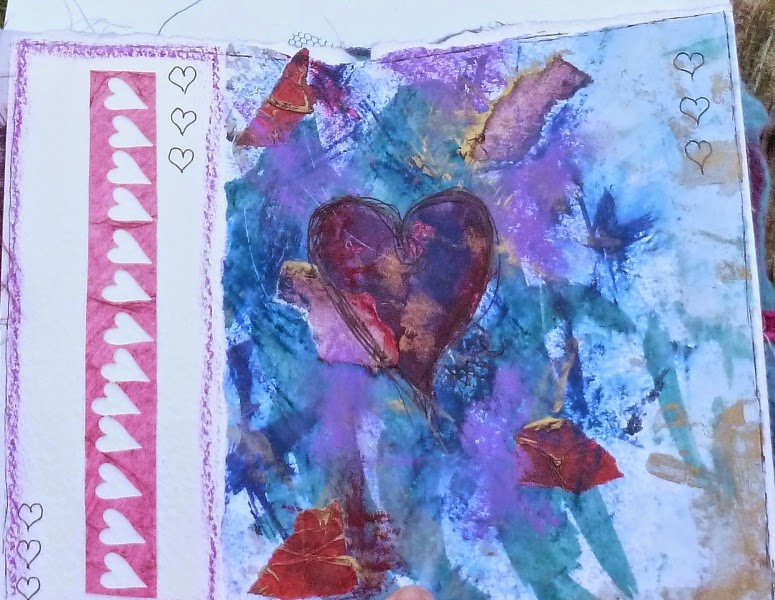 I had to repurpose an already made cover - I would never have been able to start from scratch with 2 days till deadline...... I had thought I would need to make myself a copy, another impossibility! I found myself sorting thru bits & pieces in the studio, as tho I was really making a sample sketchbook, by tidying up, really. I thought, don't pressure yourself with brand new creations, use what you have & look at your own sketchbooks. 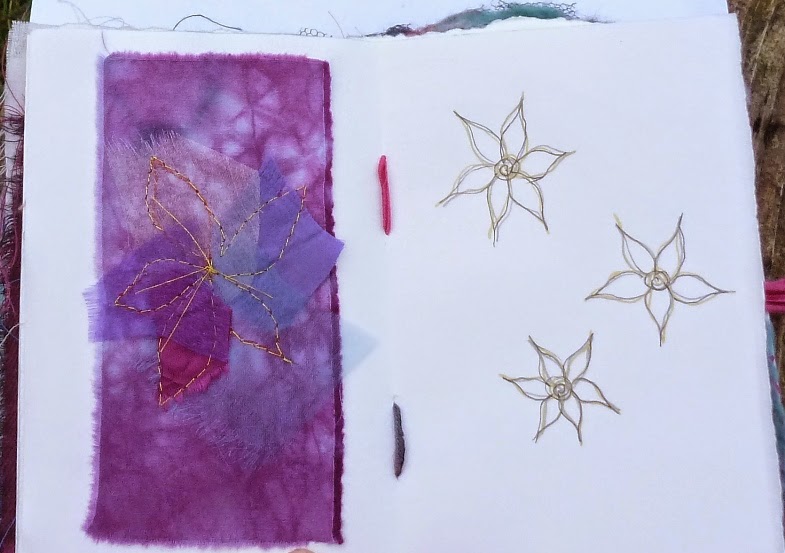 & I'd always wanted to make a hairy messy dangly jangly fabric ribbon spine on a book. My fingers are starting to complain about even a simple pamphlet stitch so I just tied the pages in with a mix of ribbon, pulling the needle thru with pliers - it WILL go thru! Then & found & made a couple, of buttons & beads with big holes that big ribbon will go thru & tied lots of knots & I seem to have done it! 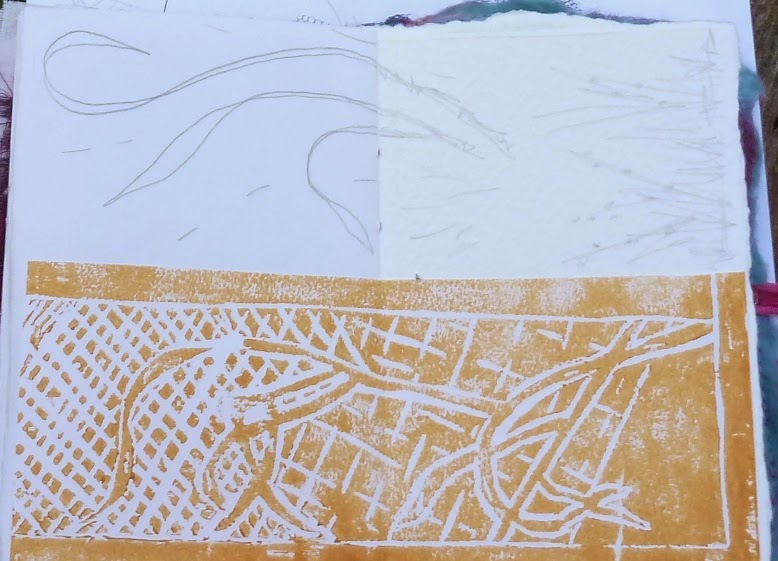 I colored a few pages, added a textile sample, drew some flowers. I found a gelatin print, stuck it in & drew some of the shapes I could see in the print. I'm always printing with Acer leaves - which reminds me, when the DH was in Ireland recently sorting our his lovely aged uncle, he sent me a pic of the Acer in his garden, just so vibrant & I asked him to bring me back some leaves. He kindly dried them out on a wood burning stove for a couple of hours, bless him & later phoned for advice ;) 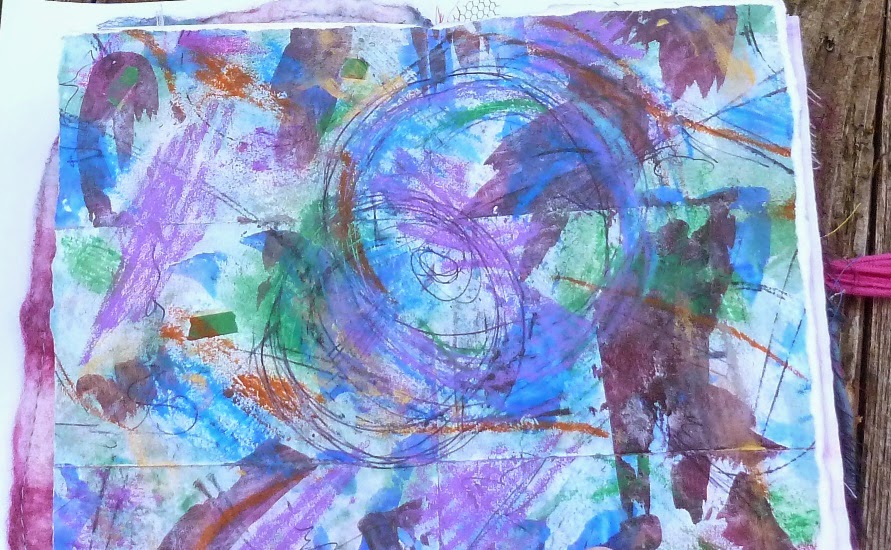 on the fabric leaf print I stitched gold veins & on the paper print I drew black lines & stitched in an organza swatch. I found a 15 minute heart collage I'd made ages ago ( so much sketchbook stuff tucked away in my studio!) left a blank space boxed in with oil bar coloring & as I turned to leave the studio I saw on the floor, honestly! the perfect row of cut out hearts & thought that would fit nicely. 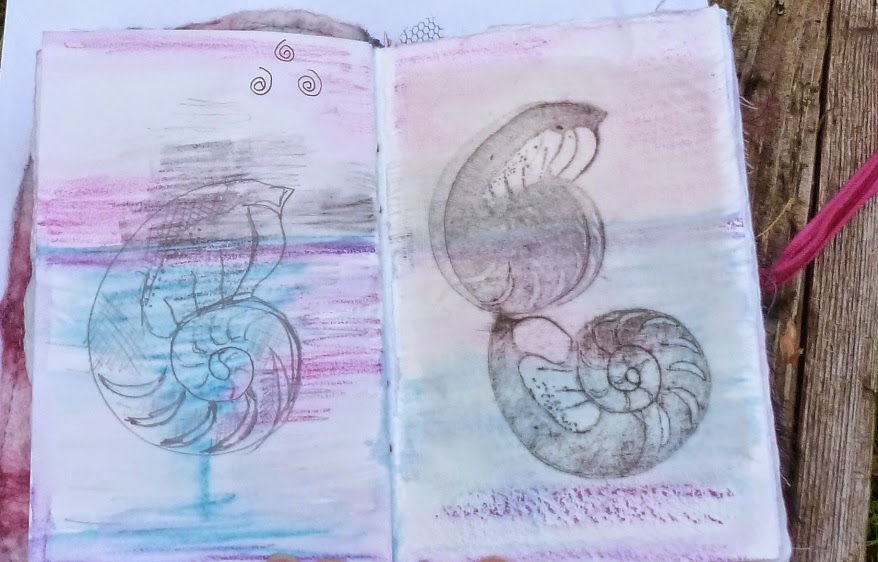 I've called this book 'things I love'' so I can put ANYthing I love in it & I couldn't do with out flowers. I carefully, just with straight stitch, made a shiny silky flower & on the opposite side drew 3 simple flowers in black & gold. I found part of a lino print which would only fit sideways, but that's ok,  thought about a piece I'd made before with grasses & drew a few strands. I filled a double page spread with a wildly colored circle piece - it could have been cut into lots of cards but I could spare it. then I found a little experiment of a commercial stamp on fabric, tidied one up with a thin marker & even tho I thought it might be too complicated & detailed I drew a version on the opposite page. Probably because I'd already made a mess with water soluble crayons I was able to do it, just simply

hearts & birdies, I finally got to make a bird for this winter's craft fairs, really cheered me up after being in the wars!

There's nothing like the feeling of having no pressure, just for once, to get on & do something you love. I missed the actual auction but I might have my sketchbook  added to Maggie's blog over the weekend, what an honor that would be, to be part of something that helps others. Feeling better now.
Posted by Emma at 14:45

Living life to the full as usual. Very "you" sketch book. Hope all aches and pain gone.

It could have been so much worse! Pleased you are on the mend. Your book is lovely - a real showcase of your work!

Ooh what a time you've had of it! Great to see all that pent up creativity bursting out now you're feeling better, the book's a treasure.

Ouch! Socks are slippy, glad you're ok. What a wonderful book! And I'm amazed what you achieved in such a short time. The dangly ribbony spine is wonderful too!

So glad you only suffered bruises. Falls are so scary. Painkillers yuck, not so fun. Lovely work, glad you are in Maggie's show. Your talents are shining. xox

Love your sketchbook and what a fantastic idea to theme it as things you love! The pages are fascinating - so much to see in each one. Hope all the bumps and bruises heal soon.

Great Colors for your sketchbook ,i love to see Moore of your book !
Love Rini xox

Your sketchbook is wonderful, you did so well in such a short itme. I hope you are beginning to feel better, you were very lucky not to have broken anything xx

Hi Emma! Hope you are now fully recovered after slipping on stairs. So easy to do, and so painful! I love the sketchbooks...keep going. Have a good Christmas and New Year. Love Alison x