Working hard to finish off 3 pieces for Skyeworks gallery Winter Exhibition, I totally forgot we had a neighbors party to go to on Saturday night - we never go to parties! So my post went out the window, as it did last night due to slight fatigue after a good long days work (not in the studio). Hunkered down in front of the fire instead to watch Homeland with the Youngest. We won't have many more nights of these family viewings as in less than 2 weeks he  heads of to Sydney, Australia......for 5 months of working & travelling. 5 months?

Welcome to my new followers, tried to follow one & no links on a couple of others - comment so I can come by, thanks! 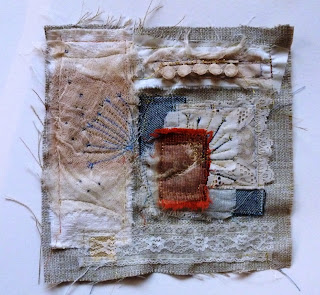 Seedhead, based on the fennel in my garden. I had thought a hint of green but blue got in there.... 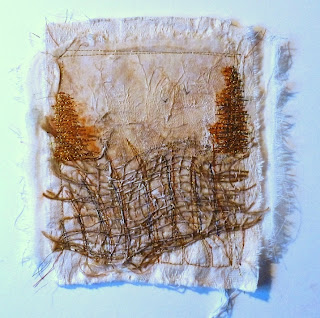 Landscape. very less is more for me, but the DH thought it was veering too much towards the less! I just laughed ;) 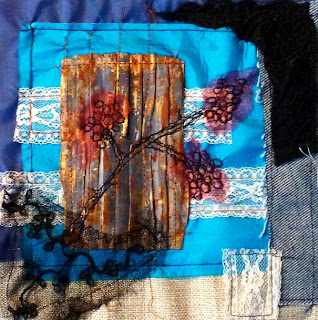 But these 3 variation pics have me stumped. It just seemed to get too busy, even with the added bits below 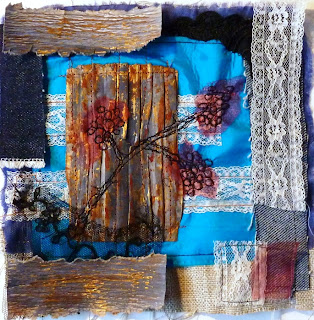 Better completely cropped? But now it's too small. The others are about 8x8" to be mounted on a canvas of 10x10" & if I crop it as below it's only about 5x5" 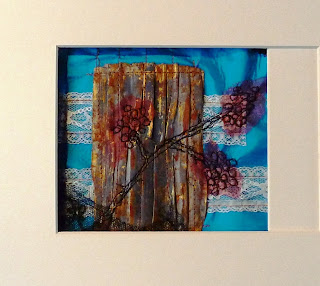 & the Youngest described it as a bit grim - meaning too dark & said it looked like underwear. Wasn't happy when I agreed there was a bit of underwear in there.....but you shouldn't be able to tell should you? Specially when you're only JUST 18 end of October! 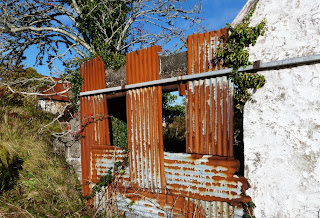 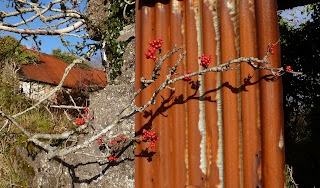 Strangely this one had actual real inspiration - I meant to post this pic last week - love this gnarled old Rowan tree outside the one derelict house in the village (I think every village has one) Then the image was reinforced at my Yoga class - during Yoga Nidra, the relaxation bit, we were to bring an image into our mind of the words Meg said & one of them was 'rowan berries against a blue sky' so in my pic I just shoved the berries along a bit. Anyway, would you cut out the business & give it a plain surround? In gold, rust, grey,  blue or white lace? I'd love your opinion. 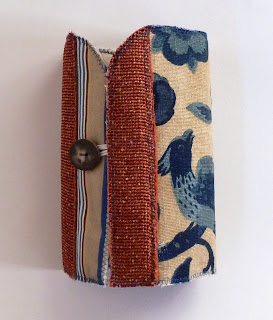 I was given a commission by some lovely holiday home neighbors, who've bought from me before...... 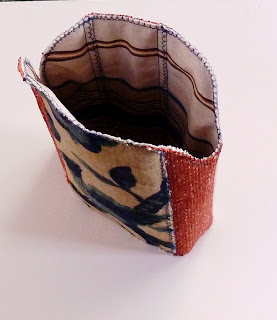 A coffee pot warmer. This caused me a lot of anxiety considering I'd never made one before & well... 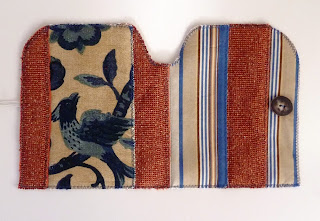 It could be something you wear up top, or a notebook cover, or really a great big cuff - that was my approach so I could get round the idea of making it. The DH couldn't believe how neat it was! 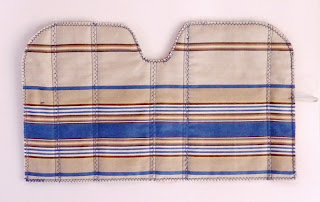 & look, I'm practically a quilter! (it has that squishy stuff inside & a top & a lining) They appreciated the Zophany & Sanderson fabrics & loved it...so I'm happy & that's what counts ;) 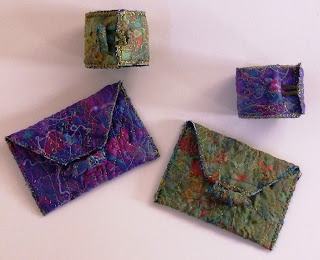 The made up purses & cuffs from last week, working on the rest! 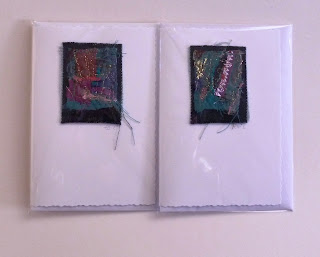 Lots of bits around so I made a couple of cards. 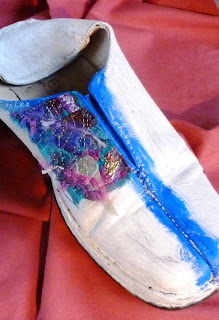 & then my first part of my shoe! 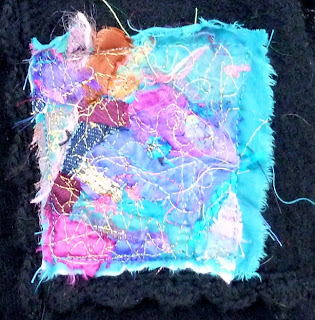 I have a confession to make, I have an addiction to chocolate, mainly snickers bars. I love chocolate but I don't want the addiction so I'm trying to make something a little crazy to keep me distracted, like the shoe & this above which will take years to come to fruition as this piece (the shoe piece is a better color representation) is only about 3x3"!
Posted by emma-alittlebitofeverything at 04:05

Mondays seem to roll around quickly these days. Before we know it it will be Christmas! Another Homeland fan here. Talk about palpitations! I love the Seedhead piece and think the blue looks very good. I can see the similarities between photo and the Rowan Berry piece and in fact thought it before I continued reading about the source of your inspiration. Hmmm ... which is the best of the three? .... I don't mind the busyness and I think the plain surround kills the joy that I see in the other 2 images. The first one is my favourite.

Love following your train(s) of thought and have to agree there may be a little too much underwear in the rowan berry piece., however the crop is a but tight. How about a more 'portrait' orientated crop keeping the length of you brilliant rusty corrugated iron piece?

I think you could do a bit of a crop, but not much - a bit off the width, but not the height! Have you tried Nairns chocolate oatcakes? They are very good - chocolatey but not so naughty at all!

You have been really busy!

So, it's off to Australia for 5 months for the youngest. That seems like a long time, but I predict it will pass more quickly than you think.

What is it about chocolate that is so addictive?:) I have attempted to limit my indulgences to a small serving of dark chocolate, only as dessert mid-day.

Sending wishes for a happy week!

Wonderful work, as always...and lots of it! I especially love the 2nd image from top. Re: the rusty fence piece, I prefer it without so much other stuff around it.
And Snickers, my fave. Although I rarely eat them.
xo

I love seeing what you've created! It looks as though it was a very busy week, but, my, what lovelies!

Gorgeous pieces - all of them! Hope your show goes well.
Love the photos as well.

Busy, busy, busy, but lovely work all, especially that first piece, I realllllllly like it. Got to continue to keep busy with the lad heading out, Mum's got to think of other things! xox

Lots again to show us Emma but like the others somehow the first piece appeals to me too!
You'll be even more busy when your youngest leaves for Australia! and not that far from me. I live between Sydney and Melbourne on the coast.
Love that tree beside the rusty iron fence too!
x Suzy

Love all these bits.
Maybe you could take the heat gun to that lace and distress it slightly??

Wow! Love all your work! Hope you get a lot of commissions!

oh emma... your work becomes more fascinating all the time... I remember your early pieces shown on this blog... you are such an inspiration! I hope that you will join me in creating the gratitude quilt this year, our 4th one!! Information about the quilt and how to participate are at the top of my blog.

I like the way that the rusty corrugated iron panels are woven together. I too like the first rowan piece, it doesn't need much tweaking. Well done for your commission design, it looks very professional.

Love the pieces you've created...all of them, but especially the second one!

The shoe looks amazing already. Not sure what to suggest about the rowan berries piece, but I think the two flat pieces of paper (?) top and bottom left draw the eye away from the rusted post and rowans in the middle.

Talk about Monday rolling around too quickly - it has almost got to the next Monday!!! Love your work as always. I like the idea of making the rowan piece more portrait shaped. Youngest off to Sydney? Aren't kids confident these days, I can't imagine going off to the other side of the world when I was that age, but good luck to him, he is coming to a beautiful place. Cheers

I've been intrigued to read all the comments about your rowan piece ...lots of good ideas there! I'm inclined to agree about the lace; maybe its a bit too perfect - I like the suggestion re: distressing it. Or maybe stain it with ink pads?
Always love reading 'your trains of thought'...you always make me smile :-D
xx
PS Nearly forgot to say....I LOVE those first 2 collages!!!