I'm so excited to have finally got my stitches together to try Coptic binding, inspired in no uncertain terms, by Iz of
Threadnoodle  making a couple of little books & making me say to myself RIGHT! , also helped by the wonderful embroidered book I bought last week (see last weeks post for links). Iz makes a wonderful variety of things, have a look around & she's had me rolling on the floor with her hysterical sense of humour (maybe not this week tho, some awful people might be building in front of them, one of my biggest nightmares - we could try making her laugh instead.... ;( 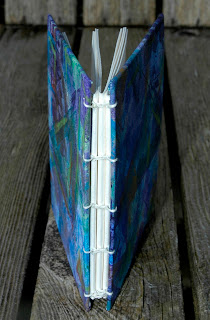 This is made from the covers I showed a couple of weeks ago, it was going to be a concertina book ;)

I admit to being pretty slow on the uptake of written instructions & even tho my arty buddy Janet-her new website promised to show me how to do the coptic stitch, I did venture round utube where these kind people have spent hours videoing themselves stitching books & I had a delightful time binding with my thread, pausing the videos willy nilly. I'll take my little books for constructive critisism to Janet next week...

When I came to write this post I was momentarily taken aback as I saw a pile of stunning books on my blogroll & was a tiny bit dishearteded. I'm sure Carol wouldn't want me to be, tho.  Look at these here ! I will get there, how I'd love to take that workshop tho! 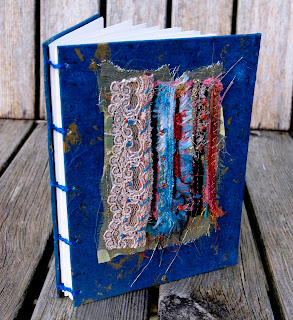 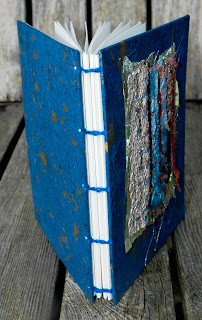 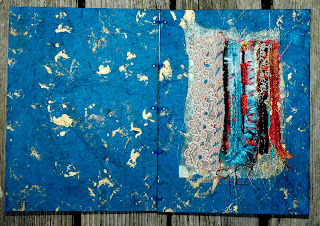 I'm delighted with my efforts, the DH was worried he'd be insulting me if he told me they were actually quite classy. I don't mind being classy occaisonally! If Janet passes the second one, it will go into my Etsy shop.

I was wanting to make a mothers day card & 'just grabbed a selection of fabric & paper'  clearing up my desk, as you do, Linda is right! I made a couple of cards extra & thought the piece above would suit a book. Hope she likes the one I sent her ;) 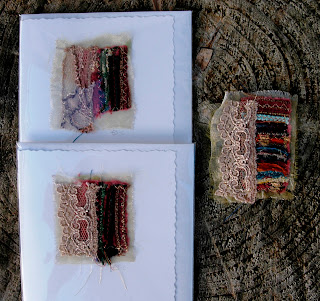 I had a go at making some tomato & bean soup & decided to put the red onion skins in with some of the shopping list paper & a paper towel. Quite surprised at the yellow color, but it was certainly a better effort that the tiny pink mark on the cloth below - looked a lovely pink in the bowl. Now I'm no dye-er....one day, but why different for paper & fabric? Interesting! 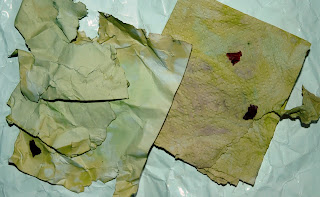 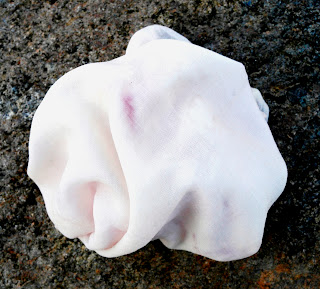 I also found time to repair some trendily ripped jeans the Youngest bought. Of course the whole leg nearly came thru so I added some cloth behind with bondaweb & struggled with some machine stitching. The smaller piece had to be by hand as I didn't have access with the machine.  Altho I don't like fake wearing of denim I was reminded of all the lovely Boro out there, do google it. 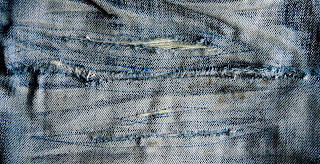 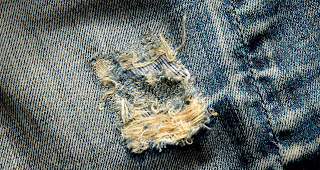 I don't know where the time has gone, I'd planned to make a few more books this week, I will when the fingers have recovered & I've had time to learn some different swear words ;) Can't believe it's Easter in a few weeks & the season starts propper, , I'm terrified!

The book is fabulous, well done! (It's ok, I couldn't hear the swearing from here).

Emma your coptic binding looks wonderful...my friend Nat is going to teach me soon (after she returns from her trip to Japan).

I love your repairing of your sons jeans. Boro is one of my favourites. Yesterday I visited Ziguzagu, Japanes warehouse, and bought a few more kimono fabrics to stitch and dye.

Gosh, my little efforts are nothing compared to yours - those books look fantastic. I've even had a zoom in and still can't tell how you've done it! I feel an afternoon with YouTube may be in order...and I'm sorry for being so miserable - I've cheered up a bit now thanks to a double-bill of Horrible Histories!

Nice job Emma, I know exactly what you mean about trying to read the instructions, I am so a visual learner, need to see it in front of me. Lovely work, those ripped jeans fabric makes me want to start hand stitching away. xox

I love the cards very much - and the jeans!! wish you a creative week!

Emma, wonderful job on the notebook! Bookbinding is one of those things I wish I knew how to do.

I'm slow to follow written instructions, too. I get impatient and start doing things my own way. ;)

I've just been catching up with your posts, love the book and your trip to Glasgow sounds like good fun...x

The book looks great, amazed that it's your first attempt.

Book making is hard on the fingers! Your's is beautiful. I can't believe it's your first! Nice work on those jeans too.

Well done with the binding,it looks good from here. Pleased you got your punch out.

Love that book, I shall have to give it a try one of these days, have plenty of pages to put into a book.

This is such a lovely mix of purples and blues, Emma! Great little book - and very nice for your first attempt (mine wasn't as good!). Nice to have your visit to my blog.
Love your studio website btw and have added it to my "Lizzie Loves" page (hope that's ok?).

Love your books Emma - and coptic stitch too - reminding me to do another one.

Great post Emma; the book looks fab (or should I say 'classy') and I'm so glad you also enjoy the 'grab some bits and layer them' technique ;-)
I LOVE the shades of green you have on the paper. So that's from red onion skins? You have inspired me.....

cool book! I still haven't quite figured out how to do that binding. Very cool cover!

And, Happy mom's day...when the heck is that there? This is funny- I see it all over etsy and kept thinking, that's in May right? ha!