It's amazing what a bit of retail therapy will do for you!

Had a lovely day in Inverness in the week getting a few essentials & I decided a new lippy & some pretty underwear would do the trick; they did! No, no photos! ;)

During my show I sat importantly behind a big table :) looking out over the room, with my work & stuff strewn all over it. For a change when I had something to eat, I sat on the other side, looking at a beautiful view of a small hill above a slip of water by a lovely overgrown garden. So tranquil. (at that moment, anyway!) Just in the water was an old boat that had been there since time began according to my Plockton gardening buddy Jill, who kindly took the photo for me when I kept leaving behind my camera. 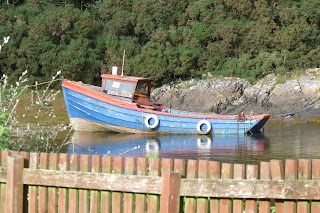 There was another one nearby which wasn't as unique but I was drawn to the windmilly type thing on the right. 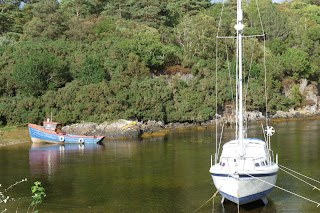 So, having thought I'd make a printing plate of this boat out of the village sandwich boxes I was deliciously collecting- well, I didn't have as much time as I thought -this week I finally made a little stitched textile piece instead.

Here's the sketch - I took it along to my arty buddy Janet & made the stamp of the windmill/fan thing.

I'd started machine stitching before I went & carried on by hand at her house - I can chat & stitch! Then I stamped a few times & as the ink didn't take on the organza, I stitched the shape in. Carried on at home - I was trying for the effect of 'distorted stitches' as mentioned in 'Stitch Dissolve Distort' by Val Campbell-Harding & Maggie Grey (pg 40/41 for those of you lucky enough to have this wonderful book that I'm revisiting slowly) The idea is to drag stitches about a bit, a case of experimenting. I don't have a program thing on my machine so can't 'invent' a stitch & keep it. Anyway, I'm just playing, enjoying coloring with oil pastel, & burning away some of the organza & a little bit of thread sketching! It may turn into a 'real' piece one day - my first boat. 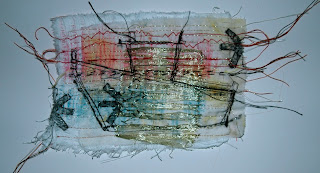 The stamp of the fan looks like an arrow but I quite like that ;)
Had a great afternoon at Janet's - we started the Printmaking class together back in January which was postponed. She encouraged me to enter work into an exhibition at Strathpeffer Pavillion end of November & they accepted my work ;) & to put some CD case sized work into Inchmore gallery for early November so a bit of a focus going on! Thanks Janet!
Posted by Emma at 13:30

I like that you take your day's experience and transform it into a piece of art that speaks to you.
Having a down time now after 5 days and two sets of company. Stitching, and maybe I'll paint tomorrow.

looks like you got your groove back. I love how an old boat can turn into some amazing art-neat to see the process and things you are trying.

Love your boat sample, I like the shimmery fabric you've used! The blue boat in the photo is the sort my hubby would like to own x

Exciting things ahead! Look forward to hearing of lots of doors opening for you!

I like the ghost like quality that you have achieved with this. Good to hear about the opportunities that are arriving. That certainly is a fantastic book, must go back and re-visit it myself

I enjoyed seeing your process from boat and windmill sightings to stitched thread sketches.

I love how you've captured your day's experience on so many levels Emma.

I love following your design process - and good luck with your new exhibiting enterprises.

Congrats and love this new piece! So much energy in it, really speaks to me. xox Corrine

Congratulations! like the shimmering light you have caught on your boat sample.

Great piece, I love your creativity:)